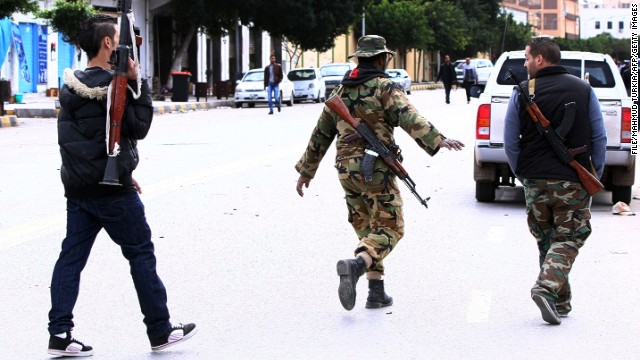 Benghazi must not overshadow big picture of Libyan security

By Karim Mezran, Special to CNN

Editor’s note: Karim Mezran is resident senior fellow at The Atlantic Council’s Rafik Hariri Center for the Middle East. The views expressed are the writer's own.

Of Libya’s manifold challenges, deteriorating security has occupied most of the international community’s attention, particularly in the aftermath of the tragedy in Benghazi that claimed the lives of Ambassador Chris Stevens and three other Americans in September 2012.

In the highly partisan Washington climate, the House of Representatives voted to establish a select committee to investigate the Obama administration’s handling of the event. But if the underlying goal is to protect U.S. diplomats and interests, the latest move misses the big picture. If the United States and its partners want to see security improved in the long run, it should instead renew its engagement with Libya and more robustly support its transition to democracy. After all, continued insecurity can have dire consequences not just for Libyans but for others too, as Benghazi illustrated.

Since the toppling of Gadhafi in October 2011, Libya has been gripped by chaos as the weak central government struggles to assert authority, inadvertently allowing centrifugal forces to gain momentum. Recent local election results suggest that, in the absence of state action and authority, a frustrated public is willing to cast a vote for elements that stand for operating outside of the law.

Libya’s General National Congress (GNC) has voted in a new prime minister. Although the results were initially disputed, Ahmed Mitig was sworn in as the country’s new caretaker leader. This presents an opportunity, in an otherwise murky landscape, for the international community to demonstrate its commitment to Libya’s political process.

In light of this latest opening, there are a few critical steps Libya’s partners can take to reverse the negative trends that hamper progress in the geostrategic North African country:

First, they should publicly and privately advocate for Libya’s national institutions. As demonstrated by the international community’s response to the Morning Glory tanker incident in which rogue elements tried to independently sell Libya’s natural resources, it is vital that the state know that it has the weight of its global partners behind it as it faces challenges to its authority. As polarized and ineffective as the GNC may be, for example, it is the country’s only legitimate entity insofar as it was elected by the people. Thus the international community must honor its choice of prime minister, urging Maiteg to form a unity government comprising high-level figures who transcend partisanship. This seems to be the prime minister’s intention, as he declared in his first broadcasted speech his intent to represent all Libyans and prioritize national reconciliation. Furthermore, the international community should exert all pressure to hold the GNC to task regarding its own promise of preparing for new legislative elections. Libya’s institutions are imperfect, but they are key to ensuring the country does not disintegrate into a nation without a state.

Second, the international community should work with the newly formed government to improve Libya’s institutional capacity to act. That is, implement the already-approved plans to train troops, police, and administrators. Further, it would be important to foster and support with technical and advisory assistance the government’s creation of inter-ministerial task forces to realize a select few well-defined infrastructure projects – for example, paving roads and refurbishing schools and hospitals. Such measures would demonstrate the Libyan authorities’ ability to act on promises, restoring their credibility in the eyes of the people.

Third, Libya’s political processes should be supported. Aside from the road map to new legislative elections to be held later this year, there are two additional tracks currently underway: the National Dialogue and constitution-writing. Slow but steady progress is being made on both fronts. A preparatory commission for the national dialogue has been organizing town halls in a nationwide outreach campaign to engage all demographics of Libyan society, hear their thoughts on what issues a national dialogue process ought to address, and to galvanize popular support for a conversation about the country’s direction. An inaugural session of the Constitutional Committee, tasked with drafting Libya’s new constitution, was held last month in the eastern town of Bayda, and new rounds of elections are being held to fill seats left vacant due to security threats and boycotts by certain groups. The two processes have great potential to complement each other and to create an inclusive political environment that makes Libyans of all stripes feel invested in the stake of their country’s future.

This would be a tremendous blow to the various forces seeking to undermine the transition to democracy in order to serve their parochial interests. There are many lessons the transitioning country can learn about national reconciliation and constitution-writing from other countries. The United States and the international community should therefore lend their knowledge, technical skills, and experience, and ensure that these processes in Libya succeed.

Topics: Libya
Next entry »Is China really about to overtake the U.S.?
« Previous entryHow world can respond to Syria's refugee crisis

Next entry »Is China really about to overtake the U.S.?
« Previous entryHow world can respond to Syria's refugee crisis