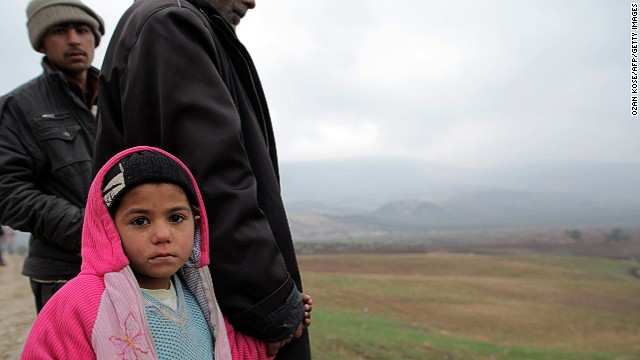 How world can respond to Syria's refugee crisis

“The Syrian crisis crashed onto neighboring Turkey’s doorstep three years ago and the humanitarian, policy and security costs continue to rise,” the International Crisis Group notes in a new report. “Ankara needs to find a sustainable, long-term arrangement with the international community to care for the Syrians who arrive daily.”

But what could a long-term solution look like? Didem Akyel Collinsworth, Turkey and Cyprus analyst for International Crisis Group's Turkey/Cyprus Project, answers readers’ questions on the issue.

According to official numbers, Turkey has already received nearly one third of all the Syrian refugees in the region. Around 220,000 of these 720,000 people are in 22 refugee camps in Turkey. The camps have high standards compared to similar shelters around the world; some international experts refer to them as the world’s best refugee camps. In addition to food and shelter, they provide healthcare, schools and other types of assistance. Nonetheless, they are an emergency response, expensive to build and run, and simply not enough to host the continuous inflow. Most of the new arrivals therefore add to a growing “urban Syrian” population inside Turkey; these are officially around 500,000 but unofficial estimates reach one million. Some of them have the means to support themselves financially but most are destitute and in need of assistance.

There are ad-hoc efforts by Turkey’s government and other countries as well as several international and local agencies and NGOs to help them, but these are currently not enough. In the southeastern Turkish provinces along the border, Syrians have a hard time finding accommodation and access to sustained aid. In February, we met new arrivals who had fled the barrel bombings in Aleppo and who were now living out in the open in makeshift tents in Turkey’s border Kilis Province because they couldn’t afford or find housing. Even for people with accommodation, conditions are difficult – we talked to a group of around 20 people living in a bare, one-bedroom apartment with no furniture or heating.

In our report, we recommend that the international donor community and Turkey agree on a housing scheme for the Syrians, where the outside parties fully fund a rent subsidy mechanism through housing vouchers or conditional cash assistance while the Turkish government provides the necessary housing supply. Outside parties can also help by supporting local infrastructure in cities that receive a large influx to make the conditions better for both Syrians and Turks living there. The Syrians in Turkey in general need a better nationwide registration system, which will provide them with identification papers, access to legal rights including employment, full education and social care.

How is the influx of refugees being viewed by the Turkish public? Does Erdogan's government have the political and popular support to cope with the crisis?

The Turkish public feels a mixture of resentment, frustration and empathy. Cultural and lifestyle clashes are most visible in border provinces, where locals complain their cities’ fabric has been destroyed by the new arrivals. They complain Syrians create a security problem and that crime rose, even though this isn’t always backed by official figures. Some locals resent that these newcomers take jobs that could have gone to Turks, but at the same time they fear that unemployed Syrians would be an even bigger menace. Nonetheless, there have so far been only a few cases of open tensions between locals and refugees. This is partly because there’s still widespread empathy toward Syrian civilians and their suffering. There’s also a sense of “kinship” in the provinces along the Syrian border.

On a larger scale, Turkey has been spared the worst of the sectarian spillover from Syria that we see elsewhere in the region. Turkey’s government has contained intercommunal tensions well so far, and the risk of major sectarian contagion remains low. Nonetheless, its Syria policy is unpopular domestically. In our report, we point to a December 2013 poll by Turkey’s Kadir Has University where 65 percent of respondents considered the Syrian crisis Turkey’s most intractable problem, and only 27 percent thought the ruling Justice and Development Party’s (AKP) Middle East policies were successful. Another poll in January found that 65 percent thought Turkey should immediately stop taking Syrian refugees, and 30 percent of these also wanted to send back those already in the country.

On the other hand, the unpopularity of its Syria policy hasn’t yet seriously hurt Prime Minister Recep Tayyip Erdoğan or his AKP government at the ballot box. AKP emerged victorious from the March 30 local elections, winning over 43 percent of the vote nationally.

Do you expect Syrians to return home, or could they eventually be absorbed into Turkey?

In our interviews, many Syrians said they wanted to eventually go home when the fighting stops. That’s one of the reasons why they prefer to stay close to the Syrian border, in Turkish cities like Gaziantep, Kilis, Hatay, Mardin or Urfa. But in reality, as the Syrian crisis extends into its fourth year, integration is happening and Turkey is already absorbing them in large numbers. Even if the violence in Syria stops, many Syrians will remain here for years, and all over the country Syrian workers have become a new class of cheap labor. We think Ankara should take more control of this currently haphazard process by working with the international community to establish better planned housing arrangements and giving those refugees who wish to integrate better opportunities for education, employment and cultural and social integration.

What would you like to see other nations doing to assist Turkey?

Turkey handles the situation better than Jordan and Lebanon, but it still needs to feel supported so that it will continue to keep its doors open to incoming Syrians. Turkish officials say they spent around $3 billion on humanitarian costs related to Syria, but have received less than a tenth of this amount as assistance. Both sides need to do more: Turkey needs to further facilitate international humanitarian NGO operations on its soil and find more creative ways to work with international donors. The international community should no longer hide behind Turkey’s initial rejection of outside assistance, or the fact that it’s richer and bigger than some of Syria’s other neighbors.

In our report, we recommend that the international donor community and Turkey agree on a housing scheme for the Syrian refugees, where the outside parties fund a rent subsidy mechanism of some sort for the Syrians through housing vouchers or conditional cash assistance, while the Turkish government simultaneously and appropriately increases the housing supply.

Outside parties can also help by supporting local infrastructure (such as healthcare, water, waste management) in Turkish cities that receive a large influx of Syrians to make the conditions better for both refugees and locals living there.

The Syrians in Turkey in general need a better registration system that provides them with uniform identification papers and access to legal rights including employment, full education and social care. Donor countries as well as major international agencies can offer their assistance to Turkey in these areas.

Turkey has reason to argue that it accepted the refugees on behalf of the international community and it shouldn’t have to deal with the consequences of this crisis on its own. Western countries can accept more Syrians overall, further facilitate family reunions, and uphold the principle of non-refoulement (non-expulsion) of Syrians, not only back to Syria but also back to neighboring countries like Turkey.

Does the United States have any role to play?

Our recommendations to the international community at large – in terms of helping Turkey financially care for the Syrian refugees and relieving the suffering inside Syria as much as possible by allowing displaced Syrians to come over the border to find sanctuary in its territory – stand true for the U.S. as well. In addition, it should continue to provide humanitarian aid to all parts of Syria where roads are secure, including across the Turkey-Syria border, and push harder for the United Nation’s approval of the widest possible cross-border humanitarian operation into Syria.