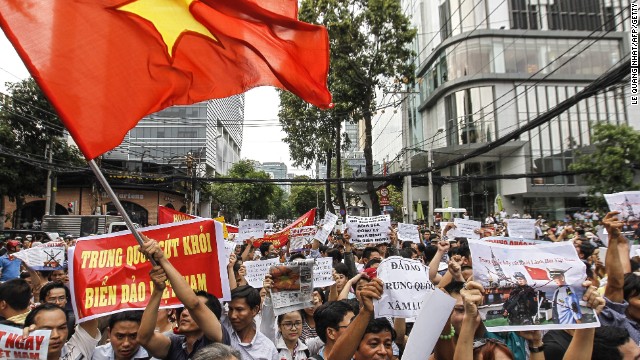 Why tensions are building in Southeast Asia

Editor’s note: Michael Williams is a distinguished visiting fellow at Chatham House and a former senior official in the United Nations. The views expressed are his own.

Five Chinese ships will arrive in Vietnam over the next few days to evacuate thousands of Chinese workers from the country. Hundreds more have fled to Cambodia and many are missing. Another 16 critically injured were evacuated by aircraft. This exodus has followed almost a week of rioting and anti-Chinese demonstrations throughout the country – the most serious such protests in Vietnam for many years, which have also hit Taiwanese as well as mainland companies.

The demonstrations were triggered by an abrupt Chinese move of a giant deep sea oil rig close to the fiercely contested Paracel islands, a move that the United States called “provocative.” For the Vietnamese, the move was a painful reminder of China’s violent seizure of the islands in 1974 in the dying days of the old South Vietnamese government, before the unification of the country. That move, at a time of national weakness, is still remembered forty years on by Vietnamese.

As a result of all this, fears of a clash at sea between Vietnam and China have risen in the increasingly febrile atmosphere evident in the region. Warships from the two countries are reportedly deployed dangerously close to the contested Chinese oil rig. For its part, Vietnam has still not revealed the number of Chinese killed in recent incidents, but it is believed to be as many as twenty.

Tensions between China and Vietnam are not new and predate the 19th century French colonial occupation. As recently as 1979, Beijing and Hanoi fought a brief but bitter war following Vietnam’s toppling of the pro-Chinese Khmer Rouge administration in Cambodia. Although relations between the two communist-governed countries improved substantially after the eclipse of the Soviet Union, resentment against China is never far below the surface in Vietnam, as is true in other Southeast Asian countries.

However, in the past few years that resentment has been fed by China’s growing assertiveness of its territorial claims in the South China Sea, claims that have brought it into dispute not only with Vietnam, but also with the Philippines, Brunei and Malaysia – all of whom have contested claims with China. And while there is no territorial dispute between the Association of Southeast Asian Nations’ largest country, Indonesia, and China, Jakarta is still extremely concerned about an apparent willingness of China to project economic and military power in the region dangerously close to the Indonesian island of Kalimantan (Borneo).

Yet until the events of the past week in Vietnam, resentment of China had in recent years been largely confined to sharp exchanges between foreign ministries and maritime standoffs in the South China Sea. Now, that resentment has assumed a dangerous popular element which will have a resonance throughout the region. After all, back in 1998, the downfall of the unpopular Suharto government in Indonesia was accompanied by days of rioting in Jakarta that claimed the lives of up to 1,000 ethnic Chinese.

The rioting in Vietnam has been widespread and not confined to large cities like Hanoi and Ho Chi Minh City. In some instances as many as 20,000 workers have been involved. The authorities have, at best, struggled to confine it and, some claim, turned a blind eye to some of the anti-Chinese excesses. Indeed, the first demonstrations in Hanoi were officially sanctioned – a rare occurrence in Vietnam. And while the government has subsequently condemned the violence, it has also called on the people “to protect our sovereign territory.”

China’s behavior is being closely watched in other ASEAN countries that have conflicting territorial claims with China. Many ASEAN leaders are privately, if not publicly, concerned, not least because they see a disturbing Chinese pattern of behavior. This has been reinforced by Chinese action in reinforcing its presence at Johnson South Reef in the Spratly islands, also claimed by the Philippines, reclaiming land with the apparent intention of building an airstrip on the island.

That this Chinese action should have come less than two weeks after the visit of U.S. President Barack Obama to the Philippines has been widely noticed throughout Southeast Asia and does not bode well for Sino-U.S. relations. Indeed some ASEAN observers have seen it as deliberate snub to the U.S. president.

Regardless, at the summit of ASEAN leaders in Myanmar earlier this month, the dispute between Vietnam and China dominated discussions. And while member states have been divided in the past between those with territorial disputes with China and those not in that predicament, there is growing recognition that Beijing’s increasing assertiveness is unlikely to diminish in the coming years.

With this in mind, although China’s neighbors may be fearful of Beijing’s growing might, they themselves are becoming more assertive. Back in 2012, when ASEAN held its summit in Phnom Penh, member nations failed to reach consensus on China’s growing maritime role, and China was widely blamed for exerting intense political pressure on Cambodia to ensure that the maritime territorial disputes were not mentioned in a final group statement. Fast forward to this year’s summit, though, and even China’s staunchest ally in ASEAN started to fall into line as the group issued a statement called for all parties in the maritime disputes to exercise restraint.

True, China was not mentioned directly in ASEAN’s statement. But in a region that has largely been wary of antagonizing its giant neighbor, it was just the latest sign that Southeast Asian nations are determined not to be pushed around.

Topics: Asia • China
Next entry »What I'm reading: Does India need a Thatcher moment?
« Previous entryShould we have the right to be forgotten online?

Next entry »What I'm reading: Does India need a Thatcher moment?
« Previous entryShould we have the right to be forgotten online?