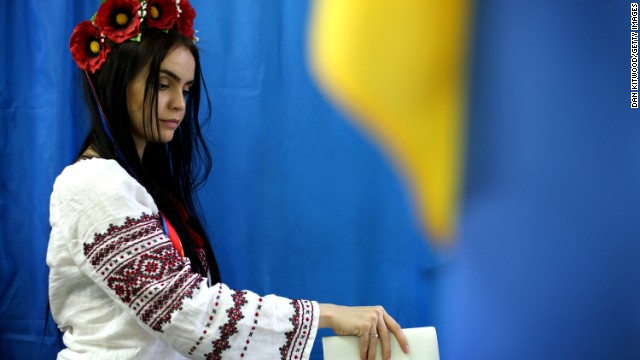 Editor’s note: Jane Harman is director, president and chief executive officer of the Woodrow Wilson International Center for Scholars. She was a nine-term congresswoman from California and the ranking Democrat on the House Intelligence Committee from 2002 to 2006. The views expressed are her own.

The next stage of the Ukrainian drama is poised to unfold like a movie, with the world looking on. That was the sense I had after observing firsthand a largely peaceful and successful election there as part of the National Democratic Institute delegation. The question now is what the title could be.

The title could be “Egypt, the sequel,” in which case we can expect those who braved subzero temperatures and death-by-sniper in the Maidan to grow increasingly marginalized and disillusioned as yet another kleptocracy takes root. Or something more inspiring could unfold, as capable civil society advocates from the Maidan and others play a key role in shaping Ukraine's first decent government ever.

Based on my time in Ukraine and conversations with Ukrainian political and civic leaders, academics and international observers, there is certainly real evidence that it could be the latter. But there are five steps that brand new President-elect Petro Poroshenko should take to help turn that promise into reality.

First, Poroshenko, who won an impressive 56 percent majority in the first round of voting, needs to implement his pledge to visit the eastern, Russian-speaking region of the country to demonstrate that he truly wants to unite the country. In addition, he should invite opponents like Serhiy Tihipko (a dead ringer for Kevin Spacey, by the way) and other capable east Ukrainians to join his government.

Second, he must reach for the Maidan crowd – including impressive women like Hanna Hopko, leader of the so-called "reanimation" (reform) movement, and participants in the Open Ukraine Foundation, founded by Prime Minister, Arseniy Yatsenyuk and his wife. Not only will they excel, but they will also be the right messengers to sell new strategies.

Third, Poroshenko must empower his government to enforce the country's anti-corruption laws and impose tough sentences on present and former leaders through a fair and transparent process.

Fourth, the new president needs an A-plus economic team – possibly including technical advisors recruited outside the country – to assess what steps must be taken to qualify for IMF, EU and U.S. loans. Then, the tough part – he must level with the public about why suffering higher gas prices (when subsidies are reduced and some repayments made) is short-term pain for long-term gain. As a former politician, I know how unpopular but crucial this will be.

And fifth, Poroshenko should welcome home the Ukrainian diaspora, some of whom returned to vote in this historic election. In the United States alone, there are large Ukrainian communities in New York and the Midwest. Millions reside elsewhere, and Ukraine desperately needs their talent and resources.

Of course, Poroshenko has many other decisions to make in the coming days and weeks, including the timing and process for drafting a new constitution and parliamentary elections. Egypt rushed these things, and its example suggests that fielding an inclusive, capable and transparent government first, and giving time for challengers to learn electoral skills may be the wiser course for Ukraine.

Ultimately, Ukraine's incoming president has it in his power to ensure that the drama that has unfolded over the past few months does not have another tragic ending for Ukraine. Like most “reviewers,” I want a happy ending at last. This movie can include one.

Next entry »Poverty fostering extremism in Nigeria
« Previous entryBewkes: TV is taking over the Internet