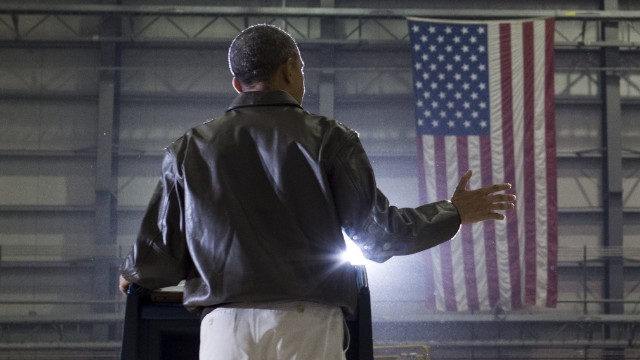 Critics of the Obama administration say military reluctance has left the United States weakened and openly defied by the likes of Russia and Syria. Is America weak?

No. Gosh, America is stronger than perhaps at most points in its history. You think about when we faced the Soviet Union, when we faced a communist China that was funding revolutionary movements all over the world against us – even when we faced a pretty powerful jihadi terrorist movement only 10 years ago. The United States is basically very strong, very secure. This debate is not really about American strength or weakness. It's about American engagement – how should America engage with the world?

Some might argue it's easier to appear strong when you're fighting one known enemy, like Japan during World War II, or Osama bin Laden in Afghanistan after 9/11. But now the United States is dealing with Russia, Syria, China, Boko Haram, al Qaeda affiliated groups all over the world. Should the president focus on one or two, or all of them? What should his foreign policy be?

That's a very, very good point. I think that it's not just that there are lots of different challenges as opposed to the central challenge during the Cold War. You know, you had the Soviet Union and that was a kind of moral and political and strategic challenge, but the world of many different challenges is also much more complicated. For example, China is our second largest trading partner, yet at the same time in some sense it is a strategic rival in Asia. We have good commercial ties with Russia, and yet Russia is a strategic adversary on many issues.

More from CNN: 4 takeaways from speech

So, how do you deal with that? You might think of the Facebook term “frenemy.” Or some kind of in between category where we have to be able to figure out a way to engage with the world, resist certain kinds of bad behavior, but at the same time not launch some kind of grand crusade. I think a lot of the president's critics are nostalgic in a way for the Cold War, when it was very easy because your ideological enemy, your political enemy, your economic enemy and your strategic enemy were all the same person. It's a whole new world out there.

In most Americans' minds, strength often translates to troops. Americans want the United States to appear strong, but most are against boots on the ground these days. So how do you appear strong without the threat of military action?

I think you put your finger on exactly the challenge the president is going to try to address in this speech…A lot of times I think the president's frustration comes from the fact that critics seem to be saying, you're not doing enough. You're weak. You're giving in. When I think his feeling is, well, I'm doing lots of things that are deeply engaged and take a lot of time, energy and effort. What I'm not doing is using the military, and I'm going to be disciplined about that. I think that one of the things that’s very much part of this president's core belief is that overusing the military actually undermines American power and strength rather than builds it up.

Is it too early to assess how historians will view the president's foreign policy?

No, I think you see the basic outlines. More than any other president, I think Obama follows in Dwight Eisenhower's mold. He is very restrained and disciplined about the use of force.

There's one line in that speech where he says, "If you look back historically, the United States' greatest errors in its foreign policy have not been from an excessive use of restraint but from overreactions." I think he's thinking of Vietnam or Iraq, which get us into trouble and then weaken our credibility and our resolve.

And that, I think – more than anything – is his guiding idea, which is be very careful. Measure twice before you cut once. And if you look at Iraq, you look at Afghanistan, you look at Syria – even in Libya, where he did intervene – these are all measured, restrained efforts.

Now, when you look at the nonmilitary part, I think he would argue there's been considerable political, diplomatic kind of intervention. But there are some people who wish that that part of it was a little bit more turbocharged. I certainly know people in Asia feel they love the idea of the pivot to Asia, but they wish there were more energy behind it.

But the overall idea, I think, is very much one of restraint and discipline.

I think that part of this debate that we've been having in Washington about Obama's foreign policy is really a debate about which direction history is moving. Are we in a world in which Russia is rising, a deep, dark autocracy that's taking over parts of its neighborhood and thus undermining the international system? China is doing the same in Asia. As a result, we're seeing world order spiral.

Or, are we generally seeing a worldwide movement toward more freedom, a greater degree of economic openness? And yes, there are some rearguard actions, and there are some cautions that we have to be concerned about. I think Obama very much feels that history is on our side. If you look at the transformation of continents like Latin America or Africa, 30 years ago – almost entirely ruled by mostly anti-western dictators – they are now in a very different place.

I think he feels like things are going generally well. Don't screw things up. Make sure you don't make big mistakes and deal with the real threats we face, like terrorists.