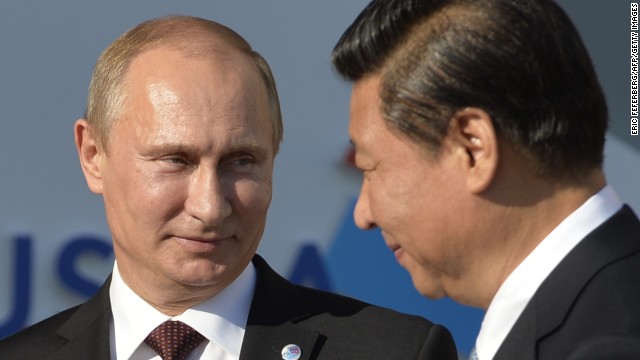 Editor’s note: Mark N. Katz is a professor of government and politics at George Mason University and the author of the recent book Leaving Without Losing: The War on Terror After Iraq and Afghanistan. The views expressed are his own.

It’s still not certain how the ongoing crisis in Ukraine is going to be resolved, but there already appears to be one clear winner: China. That, anyway, is the view of several Russian observers I met with last week when I was in Moscow.

Russian President Vladimir Putin’s response to European talk of reducing natural gas imports from Russia no doubt prompted Putin’s recent trip to Beijing and the signing of a mega-deal under which China has agreed to buy a massive $400 billion of Russian gas over a thirty year period.

But while Putin may believe that Chinese support will help him frustrate what he sees as Western efforts to prevent Russia’s re-emergence as a great power, the view among observers I spoke with wasn’t quite so rosy.

For a start, they interpreted the declaration that what China pays for Russian gas is a “trade secret” as a bad sign for Moscow, suggesting that Putin might have been so desperate for a deal that Beijing was able to get him to accept an extremely low price.

I was also told that representatives from China have already been in Moscow to indicate tacit support for Russia over Crimea and Ukraine (tacit because Beijing doesn’t want to publicly support secession, something it opposes for Tibet and Xinjiang on its own territory). And Beijing appears prepared to invest billions of dollars in helping reorient the Russian economy for exporting petroleum and other products to China.

But Beijing is expecting something from Moscow in return: Russian backing for the Chinese position in Beijing’s numerous disputes with its Asian neighbors. The problem for Moscow is that while tensions between Russia and the West have been grabbing the headlines, the rise of China should be of concern for Russia, as well as for the West.

Why? For a start there are fears that even as the number of Russians living in Siberia declines, an influx of Chinese migrants into the area risks the territory ending up under Beijing's de facto rule.

Another danger for Moscow is that growing isolation from the West – its expulsion from the G8 being just one example – will leave Russia increasingly dependent on China not just for diplomatic support, but in trading terms, too. Growing dependence on China’s market for its energy exports, for example, could leave Russia having to stomach Beijing setting the terms of trade.

More broadly, many Russian observers fear that a fast rising and more assertive China will be less likely to treat Moscow as an equal, potentially damaging not just Russian pride, but its political and economic interests as well.

Yet despite these reservations being expressed internally and in private, you will see little public discussion of this issue, which I was told is largely taboo in Russia, especially among senior government officials. Indeed, the almost universal reluctance of Russian officials to express their concerns about China on the record does not reassure the scholars I met with, but actually increases the depth of their pessimism.

All this said, Putin himself was not seen by the analysts I spoke with as having any particular affinity for China, and it is difficult to imagine him having any intention of allowing Russia to become increasingly dependent on, much less subordinate to, China. This is because he may see the current tensions in Russian-Western relations as only temporary, believing that once the dust settles in Ukraine, the West will be back seeking improved relations with Russia after realizing how much it needs Moscow’s cooperation on key issues.

But will it actually play out in this way? There was much skepticism among the people I spoke with in Moscow that it would, especially as in their view Washington is less able than in Cold War days to fashion an effective foreign policy, while the Europeans seem unable to formulate policy at all.

If they are right, then Russia’s current alienation from the West may become entrenched, and Moscow may not have any choice but to rely more and more on China. And the feeling I got in Moscow was that no one seemed to think there was anything they could do to prevent this.

Topics: China • Russia
Next entry »Will this nation disappear off the map?
« Previous entryWhat I'm reading: How to tackle poverty

Next entry »Will this nation disappear off the map?
« Previous entryWhat I'm reading: How to tackle poverty