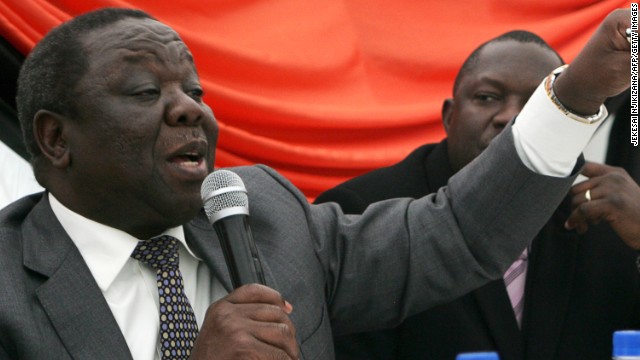 Where Zimbabwe goes from here

By Morgan Tsvangirai, Special to CNN

Editor's note: Morgan Tsvangirai is president of the Movement for Democratic Change and former prime minister of the Republic of Zimbabwe. The views expressed are his own.

Zimbabweans were sincere in congratulating Nigeria in becoming Africa's leading economy earlier this year. We applauded its citizens and its leadership for overseeing the successful restructuring of their economy, and its subsequent ascendance to lead the continent in the global marketplace. But we also looked at Nigeria's achievements and wondered how we, too, might be able to achieve such heights. After all, we have done it before.

Yet such aspirations also raise serious questions about our ability to meet them, doubts that will only have been stoked by elections last summer. Last July, Zimbabweans calmly lined up for hours at polling booths across the country, united in embracing their democratic right and duty to vote for their country's future. But the official results did not appear to reflect the nation's collective will, prompting a weary shrug of the shoulders from the international community.

So, would the rest of the world be justified in losing hope in Zimbabwe's ability to change after another far from perfect election? The answer can be found in the progress that the country has made, progress that might surprise the casual observer.

Between 2008, which saw the establishment of the historic coalition government that I joined with President Mugabe's ruling Zimbabwe African National Union-Patriotic Front, and last July's election, Zimbabwe made significant progress. Six years ago, hyperinflation and directionless leadership had devastated our way of life. The country's store shelves were empty, food was scarce, violence was rampant and the continent's former bread basket was now widely dismissed as a basket case.

But fast forward to 2012, and through the significant efforts of the MDC and even some of our former opponents, and things had started to look up for Zimbabwe. Food security measures were introduced to ensure that Zimbabweans did not go hungry, such as curbing exports of homegrown staples like maize, while hyperinflation was brought in check through a currency devaluation and swift transition to the U.S. dollar. Meanwhile, a focus on a skills-intensive labor market helped quell unrest by making sure families could afford to put food on the table.

Sadly, progress stalled in the wake of the uncertainty that came with last year's election. But despite such uncertainty, Zimbabweans still understand that the country must assuage international concerns of instability and a lack of government oversight if it is to continue on the path of reform.

Which areas of the economy are ripe for the kind of global partnerships, integration and growth that Zimbabwe's economy needs? Mineral procurement, agribusiness and telecommunications are, contrary to what many might think, fields in which Zimbabwe has long excelled, and are areas in which Zimbabwe has the potential and capacity to exceed expectations again.

But achieving the kind of accountable and modern corporate governance that the country needs, rather than the forced indigenization and patronage too often practiced, will mean the country's politicians abandoning the mudslinging and infighting that has blighted politics here.

Meanwhile, the international community has its own role to play – but it must involve more than charitable donations or the stick of sanctions. We would therefore encourage our partners overseas to work with us during this sensitive period of rehabilitation to help promote and ensure the bolstering of human rights, work with us to eradicate the scourge of institutionalized corruption, and support those looking for free, fair and credible elections. Against this backdrop, we also welcome any assistance that governments can provide in helping us reopen our markets for global trade.

But ultimately, if Zimbabwe wants to achieve sustainable development, this country's politicians will need to look beyond the petty politics that have continued to hinder this country. After taking a step backward with last year's election, Zimbabweans must now allow themselves to be inspired by Nigeria's economic achievements, rather than pigeonholed as a hopeless cause.

Zimbabwe has a bright future – if only its leaders will take the steps to get us there.​​