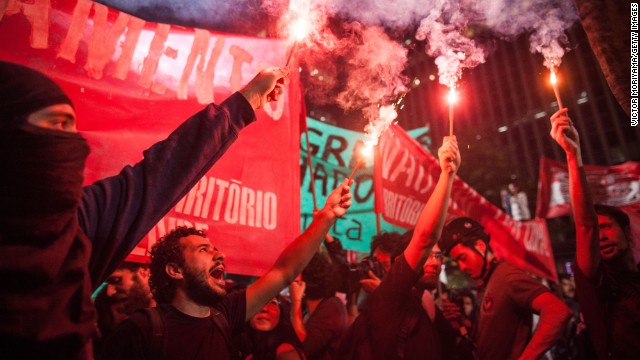 How the World Cup has already changed Brazil

By Peter Schechter, Special to CNN

Editor’s note: Peter Schechter is director of the Adrienne Arsht Latin America Center at the Atlantic Council, which has released the new policy brief Will Brazil get what it expects from the World Cup? The views expressed are his own.

As Brazilians prepare for the opening game of this year’s World Cup, the public can be expected to engage with their wonderful soccer team and perhaps look forward to some celebrating – after all, Brazil is a firm favorite with the bookmakers. But the doubts about the tournament – visible in protests, newspaper editorials, NGO activism on stadium cost overruns, strikes, and increasingly strident criticism of President Dilma Rousseff – speak to important questions about Brazil's future.

In fact, whatever happens over the next month, one thing is clear: Brazil is at a moment of profound transition. The "model" is in doubt.

Over the past decade, Brazil flourished partly due to the fast flow of high-priced commodities sold to China and the rest of the world. The government of President Luiz Inácio Lula da Silva brought innovative social experiments that raised millions from poverty. But Brazil neglected to prepare for the down cycle by reforming its economy and improving services. Now, reduced demand for exports and lower commodity prices are exposing the burdens of a vast state of 200 million citizens.

The rising middle class that Brazil engendered over the past fifteen years now demands more – higher quality jobs, better services, and expanding infrastructure that the massive Brazilian state has been unable to deliver. And while this model worked well for twelve years of impressive social expansion, it seems today unable to deliver the services, efficiency, productivity, or jobs needed to grow a world economy.

So, while the debate about how to move Brazil forward may recede for the duration of the Cup, the doubts have now entered into the country's political bloodstream. And they will reappear as soon as the presidential election campaign begins in early August because Brazil is in a funk at a time when it should be enjoying international acclaim and respect. Indeed, a June Pew Research poll on Brazilians' view of the Cup is devastating. By 72 percent to 26 percent, Brazilians are dissatisfied with things in their country today.  Sixty-one percent, meanwhile, believe the World Cup is a bad thing because it takes money away from public services, and 62 percent say that it will either hurt or have no impact on Brazil's image abroad.

Why have Brazilians turned against the World Cup? And why has the government been forced to engage in a PR blitz in support of the tournament in a country as soccer crazy as Brazil? The main problem is that the tournament has become synonymous with corruption in Brazil, with dissatisfaction growing with cost overruns.

All this said, and despite the deep frustration with the government, once the tournament kicks off, it will be Brazilians' natural generosity and elegance, rather than violence or street marches, that will be on display for the millions of visitors descending on the country over the next month. But make no mistake – the relative quiet on Brazil's streets for the next several weeks of soccer does not mean that the debate over the World Cup hasn't altered the country in profound ways.

Of course change will not come quickly in a country the size of Brazil. But whoever is in power following October’s election – whether it be a second term President Dilma or a first term rival – will have to loosen state control in favor of a private sector better able to deliver goods and services. As a result, Brazilians will gradually become accustomed to seeing the state move from employer, supplier and contractor of jobs and services to a more modern role of guarantor of rules and a catalyst of growth, which in turn should mean the infamous Custo Brasil (Brazil Cost) of soaring taxes and steep import tariffs recedes as the country tries to entice investors.

The World Cup has unleashed new powers in Brazil, leaving the country's model in question and turning what once looked like a cakewalk for Dilma's party into the most interesting and relevant Brazilian elections since Lula first came to office.

Clearly, whichever stakeholder you care to name – whether it be civil society, protestors, NGOs, indigenous groups, business associations, judges, or the media – the half-time result will have proven to be the same: civil society 1 – Brazilian state 0.

Topics: Brazil • Economy
Next entry »Time to rethink 'concession' mentality on Cuba
« Previous entryIraq is on a precipice