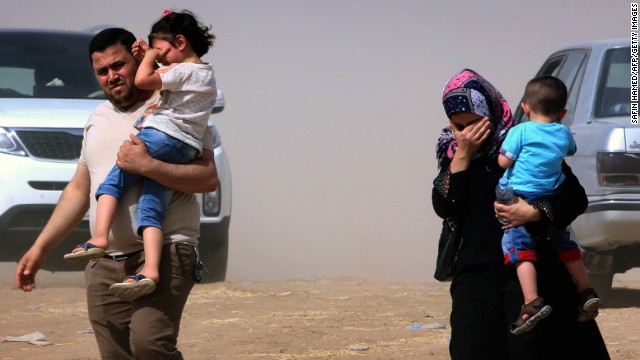 CNN speaks with Fareed Zakaria about the latest developments in Iraq, what the takeover of Mosul by the Islamist State in Iraq and Syria means for the country’s future, and whether the United States should get involved militarily. This is an edited version of the transcript.

So what is going on in Iraq right now, because it seems like, almost overnight, the Islamist State in Iraq and Syria has moved from Syria into Iraq and is making dramatic progress.

You know, part of it isn’t as unexpected as it seems. This group has been making some progress, associated groups have been making progress, over the last few months. Careful military analysts have been warning of these kinds of things.

But the basic condition is this: The Iraqi government under Nuri al-Maliki has excluded and persecuted the Sunnis. As you know, any insurgency grows on the discontent of the population. And what has happened is that the population in Iraq has gotten more and more discontented. They're joining up with radical groups in Syria. And they are now moving to Baghdad. The second-largest city in Iraq has already fallen.

One shouldn't exaggerate it in the sense these are a few thousand people. But here is the big deal – in Mosul, they robbed a government treasury of $500 million in cash. In Iraqi dinars, but in cash. They also got a lot of gold. So they might now be the most well-funded terrorist organization in the world. And you can buy a lot of the allegiance of the tribes in this area. So all of a sudden, they may find they have a lot more followers than they had just a couple of days ago.

These U.S.- trained, U.S.-armed Iraqi military personnel, at least in Mosul and other parts, we've seen them take off their uniforms, put down their weapons, and they simply ran away. Why are they doing this?

More from CNN: How to respond to ISIS threat

The surge was mostly a political operation where you were bringing the Sunnis back into the fold by bribing them, by promising them jobs, by doing all kinds of things to include them. Nuri al-Maliki reversed almost all of those measures and then went after the Sunni elites, went after the vice president, the finance minister. So what has happened is all the gains of the surge – the political surge – were lost. The Sunnis feel excluded. And they are now mounting this ferocious opposition.

And the key thing to remember, the Shia are the majority in Iraq, so they thought they could oppress this Sunni minority easily. But in the broader Middle East, it’s the Sunnis that are the majority.

If they're commandeering the area, what is the threat to the U.S.?

It would mean more chaos and more complexity. I don't think it means some single dramatic thing. For one thing, I don't think Baghdad will fall. You never know. But remember, the Iraqi army is an army we trained, funded and sustained. It's somewhere between half a million and a million troops. We're talking here about 2,000 or 3,000 fighters, not particularly well equipped. So the Iraqi army has got to be able to hold Baghdad. It would be inconceivable to me that they wouldn't be able to do that.

More from CNN: Who's to blame for Iraq crisis

But what about the towns around increasingly falling into the hands of ISIS? It adds to the complexity. It adds to the reality that you have chaos in Syria which has now spilled over and created chaos in Iraq. And the United States has to ask itself, yes, this is terrible for us, but if we jump into the middle of this, are we going to make much difference? Do we even know which side to support? This is a very tough one for the president. And it is easy to take pot shots, but the mistakes have been a decade in the making, from the actual invasion of Iraq, on.

So does the U.S. get involved militarily?

I think with the current government in Iraq, it would be a mistake to offer major support like air strikes and things like that. Because ultimately, I don't think al-Maliki can put this back together again. I think what we should demand is a national unity government. Al-Maliki step down as prime minister. A more conciliatory figure takes his place. Bring in Sunnis as well. Under those circumstances, I think that the United States should support, but not this government.

Topics: Iraq
Next entry »Who lost Iraq? The Iraqis did, with an assist from George W. Bush
« Previous entryTime to rethink 'concession' mentality on Cuba

Next entry »Who lost Iraq? The Iraqis did, with an assist from George W. Bush
« Previous entryTime to rethink 'concession' mentality on Cuba