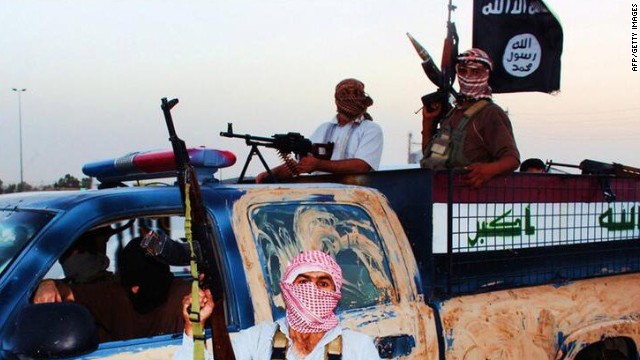 To beat ISIS, exploit its contradictions

By Frederic Wehrey, Special to CNN

Editor’s note: Frederic Wehrey is a senior associate in the Middle East Program at the Carnegie Endowment for International Peace, a former advisor to Multi-National Force-Iraq and the author of Sectarian Politics in the Gulf: From the Iraq War to the Arab Uprisings.

Back at the height of the U.S. war in Iraq, the late emir of what was then just the Islamic State of Iraq (ISI) remarked that “Iraq is the university of terrorism.” Its curriculum, he believed, was made up of all the combat tactics students would learn there, before graduating to range beyond the borders of Mesopotamia. But the jihadi leader’s pupils seem to have absorbed another lesson from the Iraq War: the necessity of winning popular support and co-opting local sources of authority.

In its lightning sweep across northwestern Iraq, ISI’s successor, the Islamic State in Iraq and Syria (ISIS) has engaged in a careful strategy of civic administration, social outreach, and coalition building.

Tapping into a wellspring of Sunni grievances against Prime Minister Nuri al-Maliki, ISIS – though disowned by al Qaeda for its brutality – has allied itself with Sufi-tinged Baathists like the Jaysh Rijal al-Tariqa al-Naqshabandiya (The Army of the Men of the Naqshbandi Order), Sunni tribes, and Iraqi Islamist “resistance groups” like the Jaysh Muhammad and Ansar al-Sunnah. It has done so, ironically, by downplaying its own dogma, emphasizing Sunni Iraqi nationalism, and trumpeting Iraq’s clans as the real vanguard of the revolution. In the areas it has conquered, it has supported the appointment of former Saddam officials to political office, such as the recent election of Ahmad Abd al-Rashid as the governor of Salah al-Din Province. Prominent Iraqi religious authorities, such as the Grand Mufti of Iraq, Rafie al-Rifai and the Association of Muslim Scholars, have endorsed its campaign.

But there are questions about the durability of this coalition. Will a diverse constellation united by mutual enmity against a chauvinistic leader endure beyond the current battlefield euphoria, when tough questions of governance arise? Can the competing pulls of Iraqi nationalism and tribal particularism coexist with ISIS’s millenarian plan for a caliphate? And if ISIS devolves administration to such a diverse array of power centers, can it really be considered to have achieved its goal of a pure Islamic state?

If ISIS’s past behavior in Syria, its struggles in Anbar, and its own pronouncements and charters are any guide, there are sharp limits to this “big tent” approach. At its core, a profoundly totalitarian impulse is embedded in its DNA that leaves little room for co-habitation and will likely provoke a backlash. Like many a utopian movement, ISIS is afflicted by intolerance and a capacity for great violence. Try as it might, it cannot escape the shadow of its nihilistic progenitor, Abu Musab al-Zarqawi.

Already, fissures are developing over its uncompromising vision and imposition of sharia law. For every Tweet of trash collection, vaccinations, and children’s toy drives, there are corresponding images of mass executions, crucifixions, and beheadings. Add to this is its longstanding policy of extortion. And its recent killings of captured Iraqi soldiers countermands injunctions by its Sunni tribal allies, such as the emir of the Dulaym, to spare the security forces for their “brave decision” to surrender. A leader of one of its Baathist allies in Mosul recently accused it of being made up of “barbarians.” Tensions could also develop between its Syrian cohort and its overstretched Iraqi branch, which has swelled in the recent campaign, about goals and priorities.

But one thing is sure to make ISIS consolidate and flourish: a slide to sectarian war, spurred by a heavy-handed response by al-Maliki’s army and its allied Shiite militias. The tribes, ex-Saddamists, and other aggrieved Sunnis will endure its draconian mores if they see in it a useful umbrella in an existential fight for their people’s survival. Like Zarqawi, this is precisely what ISIS is aiming for by killing Shiites.

It is vital, therefore, that any response – Iraqi, Iranian, or American – be designed to exploit the divisions and contradictions within the organization and the coalition it has formed. Airstrikes can slow its march but its ultimate dislodging hinges on mitigating the Sunni grievances that have fueled its rise. Such a solution will invariably mean an even greater shift of power from Baghdad to the provinces – and a corresponding rise in hybrid governance marked by tribal, sectarian and “official” authorities working side-by-side.

In many respects, such an arrangement is not unprecedented. It harkens back, albeit imprecisely, to an earlier era under the British mandate when, as the historian Hana Batatu put it, “Iraq’s history to a large extent was the history of its sheikhs and their tribes.” This lasted until 1935, when the nascent Iraqi army under General Bakr Sidqi broke the back of the tribes and the military underwent a meteoric expansion in the coming decades.

The peace subsequently enforced by the army and security services throughout Iraq’s post-colonial history was always a peace of the graveyard: sectarian, tribal and ethnic identities were cynically managed and exploited. In the waning years of the Saddam era, with the weakening of state institutions through sanctions, the drift toward a destructive localism accelerated. In some sense, then, al-Maliki’s divisive rule – and his recent reliance on Shiite tribes and militias against ISIS – is simply a continuation of this trend. Redirecting it toward a more inclusive form of governance will be a herculean and generational task – one that cannot rest solely on airstrikes, or even the building of stronger security forces.

Next entry »The real problem with sports' governing bodies
« Previous entryHaass: Idea of Iraq that's united is essentially over