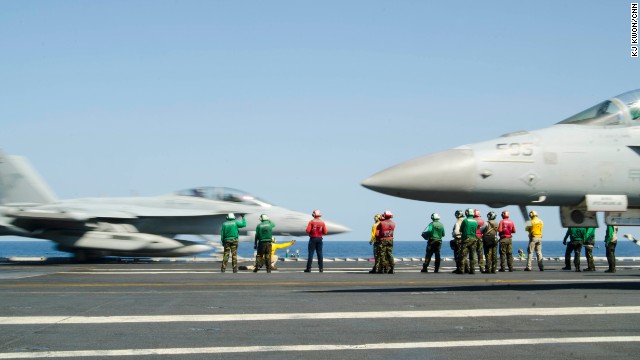 With the Islamic State in Iraq and Syria (ISIS) making significant gains over the past week, including advancing closer to Baghdad, U.S. President Barack Obama is reportedly considering whether to deploy U.S. air power to assist Iraq's armed forces. But what would such an intervention mean in practical terms? And how effective an option would it be? GPS speaks with Karl P. Mueller, associate director of the Strategy, Doctrine, and Resources program at RAND Arroyo Center and a senior political scientist at the RAND Corporation. The views expressed are his own.

Could U.S. air power be used to intervene in Iraq at low risk to U.S. aircraft and personnel?

Yes. Numerous U.S. aircraft are already located in the region, particularly in Qatar and on the aircraft carrier USS George H. W. Bush, which moved into the Persian Gulf over the weekend. Additional aircraft could be deployed quickly, and there are many nearby land bases from which U.S. or partner aircraft could operate if permission were granted by the host nations.

The 2011 air campaign over Libya faced little in the way of air defenses, suffering only one aircraft lost (to a mechanical failure) and no casualties among the intervening forces. Air defense threats from ISIS would likely be even weaker. However, it would be naïve to intervene with the expectation that there would be no losses of aircraft or personnel at all, and were any aircrew to fall into the hands of the insurgents, the results could be expected to be grisly.

The financial implications of an aerial intervention would be modest because most of the forces needed are already assigned to the theater. The Libya operation cost the United States and its allies less than $3 billion over eight months, an amount that pales in comparison with the bills for the current ground war in Afghanistan.

In strategic terms, intervening in Iraq would have more in common with the U.S. role in South Vietnam in the early 1970s or in contemporary Afghanistan, or the recent French intervention in Mali, than with the operations against Gadhafi’s regime in Libya or the former Taliban government in Afghanistan because in this case, the United States would be attacking an insurgency rather than supporting one.

Tactically, on the other hand, the specific missions that would be involved in an Iraq intervention would indeed resemble those of the air campaign in Libya. Western air power proved very effective at stopping Gadhafi’s forces from advancing on rebel strongholds and crushing the uprising before it became viable; coalition air power then mauled the regime’s military forces to make rebel victory possible. However, bombing did not, as some had optimistically hoped, coerce Gadhafi into surrendering or abdicating. In Iraq it would presumably play similar roles.

How might U.S. air power be used in Iraq?

The first job of air power in Iraq would be to help stem the advancing tide of ISIS, mainly by striking their forces advancing toward Baghdad or other cities not already under their control, along with other targets that underpin ISIS’s ability to fight. Once that was accomplished, air reconnaissance and strikes could be used to support counteroffensives by Iraqi security forces – or other troops – to roll back the insurgents’ recent gains. In the face of U.S. air power, ISIS forces would need to disperse or conceal themselves to reduce their vulnerability to air attack, which would impede their ability to fight against their enemies on the ground.

As experience in Libya and other recent conflicts have shown, finding and identifying targets is the fundamental challenge in such situations – once they are located, bombing them is comparatively simple. This is particularly true with enemies such as ISIS and their allies, whose irregular forces tend to present ambiguous rather than easily recognizable targets. Even small numbers of Western advisers serving as liaisons between air power targeteers and friendly forces on the ground would prove invaluable, and indeed may be essential in a case such as Iraq, where local forces’ calls for fire may not be entirely trustworthy.

Would the use of U.S. air power cause a lot of civilian casualties?

The popular impression that the deployment of airpower automatically makes conflicts more deadly for civilians is a myth. Large-scale, indiscriminate bombing can certainly kill large numbers of noncombatants, but the United States hasn’t conducted such attacks in more than 40 years. In Libya, every bomb dropped by coalition aircraft was precision-guided, and the civilian death toll may have been as low as one per hundred bombs used. It is ground war that is generally most deadly to bystanders, and civil wars tend to be especially bloody. Nevertheless, air strikes would certainly kill some Iraqi civilians.

Moreover, limiting civilian casualties when operating in heavily populated areas, especially cities, requires great care, which in turn constrains the use of air power against enemies there. An adversary that mingles with the populace presents serious target-identification problems, even when using precision weapons with small warheads. It’s likely that U.S. aircraft operating over Iraq would often have to hold fire instead of striking targets in urban areas.

Would air power alone be enough to achieve U.S. objectives in Iraq?

The military success of any air power intervention in Iraq depends very much on the ground forces fighting against ISIS. Bombing could do a great deal to give Iraqi security forces the upper hand, and it might also provide an important psychological boost to their willingness to stand and fight, which has often been less than impressive. But if they were ultimately unable or unwilling to make effective use of that advantage, such an intervention would be a wasted effort. (Conversely, if the Iraqis can defeat ISIS without such help, there would be little reason to consider intervening.)

And of course, even if ISIS were defeated with the help of Western air power, whether the outcome would ultimately be a strategic success for the United States hinges on what comes next in Iraq. Air power is a potent instrument for changing the course of wars, but as experience in Libya shows, shaping what happens in the wake of the conflict means building influence on the ground and devoting sustained effort to the often difficult problems of postwar stabilization.