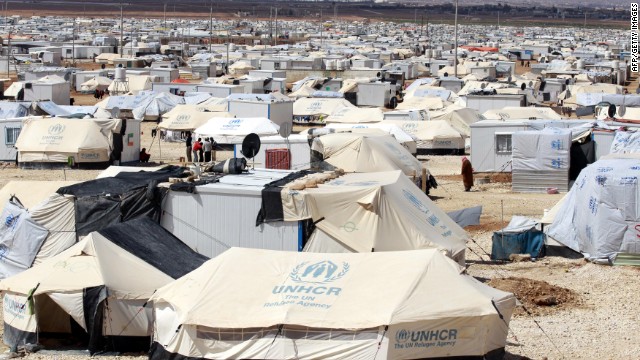 Rethink of U.S. refugee policy should begin at home

By Patrick McCormick, Special to CNN

Editor’s note: Patrick McCormick is a research associate at the Council on Foreign Relations. The views expressed are his own.

Even as we mark World Refugee Day today, the number of people fleeing violence has reached the highest level in two decades.

Perhaps nowhere is this more evident than in Syria, where the scale of the exodus has reached crisis proportions. Over nine million people have fled the murderous regime of Bashar al-Assad. Approximately 2.8 million refugees have successfully crossed the border into adjacent countries, with Lebanon now hosting more than one million registered Syrians, and Jordan and Turkey hosting a combined 1.7 million. For perspective, at the end of last year, the United States reportedly admitted 90 Syrian refugees.

Meanwhile, six million more people are internally displaced within Syria itself, part of a crisis that the United Nations has called the worst since the Rwandan genocide. And now, the surge of militants from Syria into Iraq is triggering further flight, with 500,000 residents of Mosul exiting after its takeover by armed groups including the Islamic State of Iraq and Syria.

Unfortunately, such suffering also extends beyond the Middle East.

Following the successful secession of South Sudan from Sudan in 2011, war broke out in December 2013. In the months since, more than one million have taken flight, and almost half of the country’s population of ten million is currently in need of humanitarian assistance. U.S. Secretary of State Kerry publicly warned in May of the potential for genocide, and the United Nations has appealed for one billion dollars in humanitarian aid.

In the Central African Republic, the U.N. High Commissioner for Refugees (UNHCR) reported that the conflict there has resulted in more than 226,000 refugees and third-country nationals fleeing the country since December 2013. The United Nations for its part has found “ample evidence” of war crimes. One of the victims, a seven-year-old boy named Ibrahim, left for dead by militiamen, survived a machete wound that exposed bone and part of his brain. Miraculously, Ibrahim escaped permanent brain damage, though he will bear the machete’s mark for the rest of his life.

In Europe, attempted migration across the Mediterranean Sea has become a problem widely acknowledged to be reaching dire proportions. Indeed, Pope Francis chose to highlight the issue on his first pastoral visit outside Rome to the island of Lampedusa, where he urged international rejection of the “globalization of indifference” manifested in the ongoing tragedy of migrants dying at sea in search of refuge.

And here in the United States, President Obama just this month declared that the number of unaccompanied minors migrating across the southwestern border has become “an urgent humanitarian situation.”

But while the president should be commended for calling this what it is, namely a humanitarian crisis, these developments are symptomatic of a deeper problem. The reality is that the broken U.S. immigration system has played a critical role in dividing these families in the first place. The securitization of the southwestern border by the U.S. government has made it at once both more perilous and more costly to migrate, and most of those fleeing generalized violence simply won’t be able to fulfill strict U.S. asylum requirements. Moreover, recent mass deportations of undocumented migrants – occurring at a rate nine times higher than that of twenty years ago – have divided more than one million families who now lead lives separated from loved ones.

Since October 2011, U.S. Customs and Border Protection has reported a striking increase in the number of apprehensions of unaccompanied and separated children from El Salvador, Guatemala, Honduras, and Mexico. One third of apprehended children interviewed by UNHCR said they were crossing to meet one or both of their parents now living in the United States. Remarkably, the organization found that a majority of these children were in need of international legal protection. As a result, UNHCR concluded that all unaccompanied and separated children from these countries should receive screening to determine whether they have recourse to such protection.

This finding is as clear as it is unequivocal: the southwestern border of the United States is now the site of a genuine humanitarian emergency, and many seeking refuge are children lacking the protection not only of their parents, but of their state.

So what should be done?

First, the United States has a legal obligation to abide by Article 33 of the U.N. Refugee Convention, which prohibits forcibly returning refugees to their country of origin. Article 33 is the keystone of the entire international policy architecture of refugee protection, and its violation risks the integrity of the system itself.

Second, U.S. policymakers must recognize that the migration flow across the country’s southwestern border is intrinsically mixed, and includes unaccompanied minors and others with international protection needs.

Third, the United States should work more aggressively through bilateral and multilateral partnerships to guarantee that displaced persons with genuine protection needs are identified and provided with a safe haven. Such efforts should be founded upon – and not merely substitute for – successfully passing comprehensive immigration reform founded upon the human dignity of the migrant.

On this World Refugee Day, then, the United States would do well to underscore its commitment to fundamental human rights by recognizing that refugee policy, as with all foreign policy, begins at home.