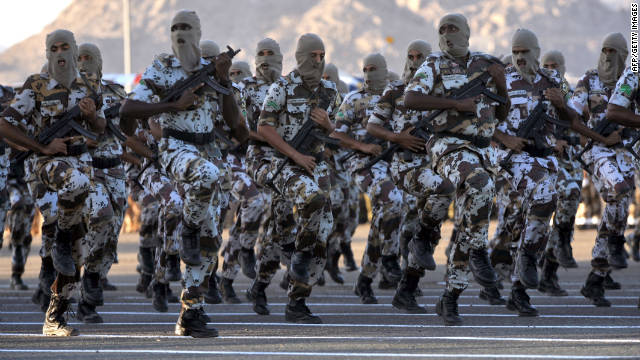 By Nawaf Obaid, Special to CNN

Editor’s note: Nawaf Obaid is a fellow at the Belfer Center for Science and International Affairs at the Harvard Kennedy School, a senior fellow at the King Faisal Center for Research and Islamic Studies, and author of A Saudi Arabian Defense Doctrine. The views expressed are his own.

It’s hard to overstate the implications of the unfolding violence in Iraq for the prospects of stability in the Arab world. As tribal and Baathist opponents of Prime Minister Nuri al-Maliki’s regime have joined with the jihadis of the Islamic State of Iraq and Syria to seize major Sunni urban centers such as Mosul, the Iraqi army has simply melted away, consistently failing to offer even nominal resistance.

The problem for Iraq’s neighbors is that the current turmoil looks set to evolve into something even more destabilizing – a sectarian conflict and perhaps civil war that pits Sunnis against Shias. Indeed, the possibility of this only increased with al-Maliki’s apparent willingness to once again turn to Iran for support. But in his efforts to bolster his own Shia-led government, al-Maliki has stoked broader tensions in the Muslim world between the overwhelming majority Sunnis and minority Shias.

And Saudi Arabia is unlikely to sit idly by as all this unfolds.

Such instability has prompted genuine concern within Saudi Arabia, concern that has been compounded by signs that the United States and its European allies are undertaking a strategic re-evaluation of their willingness to commit military force to the Middle East. (Their hesitation is, of course, understandable given that the U.S. and others have lost no small number of lives and spent hundreds of billions of dollars trying to bring down tyrannical regimes in Iraq, Libya, and Afghanistan).

In addition, the Obama administration is also no doubt wary about sending its military to support a Shia regime lest it look like it is taking sides in a sectarian conflict, something that would have disastrous consequences for U.S. and European interests in the wider Sunni Arab world.

All this is happening at a time when Arabs have been starting to move on from their colonial past, one that burdened them with arbitrary national borders that are proving so complicated to maintain. And as the U.S. and European powers look to play a more hands-off role, Arab nations are discovering that they must learn to manage their own affairs, and begin the long postponed and difficult process of debating, assessing, and solving their own problems.

But while the anarchy that Arab nations find themselves surrounded by appears to have taken many by surprise, anyone following the region closely should have seen this coming. Indeed, as I noted in a studypublished by the Harvard Kennedy School in March 2013, Iraq is just one of a number of Arabstates in the region – along with Sudan, Yemen, Syria, Somalia, and Libya – that are either teetering on the edge of chaos, or have already fallen over.

With all this in mind, it is hardly surprising that Saudi Arabia – the Arab world's most powerful state – is rethinking its place in the Middle East, and how it can and should respond to what is going on around it. Saudi Arabia’s defense will clearly need to be a central part of that conversation. But what should a new and much-needed defense doctrine look like?There are four key points to consider over what a new Saudi surge will be based on.

Saudi Arabia’s size and economic strength mean it is in a unique position to lead an evolving Arab world, and it has been investing significantly in developing its military capacity to secure its northern and southern borders, as well as the surrounding sea-lanes that are so vital to both the global energy trade and the stability of the international financial system. Indeed, in 2013, Saudi Arabia passed the United Kingdom to become the world’s fourth-largest defense spender.

But while securing the Kingdom’s borders is of paramount importance, power projection is another essential capability for a nation, including the capacity to be able to fight two concurrent conflicts, if necessary, while still being able to defend the homeland. With the upheaval currently facing the region, such a scenario doesn’t seem particularly far-fetched, at least in the medium term.

Meanwhile, the advances by ISIS – an al Qaeda splinter group – are another reminder that a key element of any nation’s defense must be a counter-terrorism capability. After all, the militant “legions” that have seized Iraq’s second city among others are basically non-state actors. It is therefore essential that Saudi Arabia continue to invest in what is already one of the largest and most efficient counter-terrorism programs in the world to ensure that the threat is managed both within and outside the Kingdom’s borders.

Finally, central to any Saudi defense doctrine should be a commitment to bolstering its strategic partners – and there are encouraging signs the Kingdom is already aware and following through. For example, when Iran-supported insurgents sought to overthrow the government of Bahrain, the Saudis were quick to spearhead a Gulf Co-operation Council contingent that moved in to secure critical state infrastructure.Such moves are likely to increase in number, especially as the number of weak, failing or failed Arab states facing insurgencies continues to rise.

The reality is that as the Kingdom's northeastern neighbor teeters on the brink of total civil breakdown, the Saudis must prepare for the worst even as they know that they face myriad other challenges including civil war in Syria and Libya, Iran-backed revolutionary movements in the region, terrorist organizations and social disorder in Yemen and Afghanistan, and extremely tenuous political situations inPakistan, Egypt, Jordan,Lebanon, Tunisia and Bahrain.

True, the kind of defense doctrine outlined above needs to be flexible and able to adapt to constantly changing realities in the Middle East and the wider Muslim world. But if the Saudis can follow these broad principles, they should be well-placed to help ensure the Kingdom remains both a strong and secure nation state – and the central anchor of stability in the Arab world.