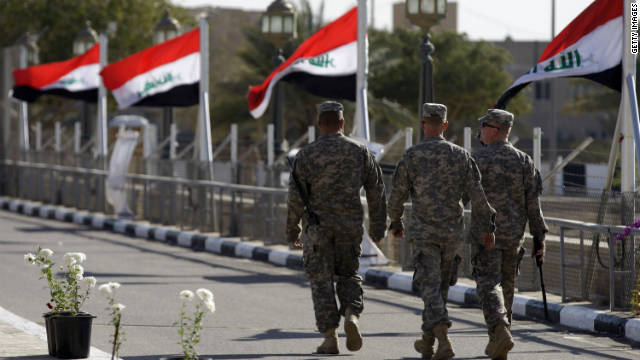 CNN speaks with Fareed about the prospects for a unity government in Iraq, the roles of Iran and Syria, and what the United States can and should do.

With the U.S. saying we're not going get involved with air strikes right now, that our response is going to be very, very limited, does that create a vacuum where Syria and Iran were bound to get involved?

Well, I think that they were bound to get involved anyway and they’ve been involved for the last several years. The thing we’ve got to remember is that we think of the Middle East in terms of borders that are real and hard. And we think of it in terms of dictators and democrats. What's really happening in that part of the world is a sectarian war between the Shias and the Sunnis.

This crosses all borders, so that ISIS is battling the Shia government in Baghdad. It's battling what it regards as essentially a Shia government in Syria. It's an Alawite regime, but it's basically considered a heretical regime. So they’ve got the same enemy. The Iranians, the Syrians and the Iraqi government all see ISIS as their enemy. We are the ones who come in with the complication. We say, well, we sort of like the Iraqi government because it's sort of democratic, but we don't like the Syrian government because it's a dictatorship, and we don't like the Iranians.

But our position is incoherent. And I don't mean this about the Obama administration. I mean it about U.S. policy, because we’re trying to overlay this idea that we bring to the party, which is, there’s going to be democracy and pluralism.

That's not what's going on there. This is a Shia-Sunni fight. And if you get involved, you're picking a side.

So you could say Syria, Iran, all this extra complication could be an argument just for saying it’s such a mess, another reason we shouldn't be there.

Look, one very realpolitik way to look at this would be to say, a lot of bad guys are killing each other, that this isn’t entirely bad for the United States.

Hezbollah, for example – a terrorist group that we really don't like – is busy trying to support the Syrian government and perhaps even helping the Iraqi governments. The Iranians' Revolutionary Guard is in there. All these guys are being distracted from doing all the bad stuff we worry about because they're helping their friends. You know, at the very least, let some of this sort itself out before we jump in there, as I say, with our very different notions.

And yes, if we’re going to have 600,000 troops and impose order, maybe we can remake this region. But otherwise, let's just watch for a little while.

Let's talk about one group that the United States would like to see acting more – the Iraqi government of Prime Minister Nuri al-Maliki, who did deliver that speech where he essentially said, no, I'm not going to form a unity government here. I know you want it, United States, but no thanks, I don't think I will right now. What does that say right now about the U.S. influence on that government?

Look, we tried to get him to do this when we had 150,000 troops in Iraq. The United States, Washington pressed him, and al-Maliki was pretty unyielding at that point.

What we’ve got to remember, again, this is really democracy in action in the sense that al-Maliki wins by appealing to the Shiites. And his worry, and the reason he gave that speech, is he needs Shiite allies. And he's worried about his right. He's got a Tea Party – it's called Muqtada al-Sadr. And that guy isn't going to support him if he makes nice to the Sunnis. So he's trying to figure out how he can cobble together a stable majority in parliament.

And al-Maliki is to blame for all this. I'm not justifying, but I'm explaining to you, even in Iraq, there’s a real sectarian war even in the ballot box.

Have President Obama and Secretary of State John Kerry given al-Maliki a condition that he will never meet or can never meet?

He could meet it. I think the realistic scenario would have been if a long time ago the Bush administration hadn't chosen al-Maliki and these hard-line Shia parties. But we are where we are. At this point, it would be tough for al-Maliki – it would go against his nature. You are asking him…for 25 years, this guy has been a hard-line Shiite sectarian politician.

People forget, when he was in exile from Saddam Hussein's regime, he lived in Iran. He lived in Damascus. He was funded by the Iranians. So now to say to him become an inclusive, pluralistic democrat – that's not who he is.