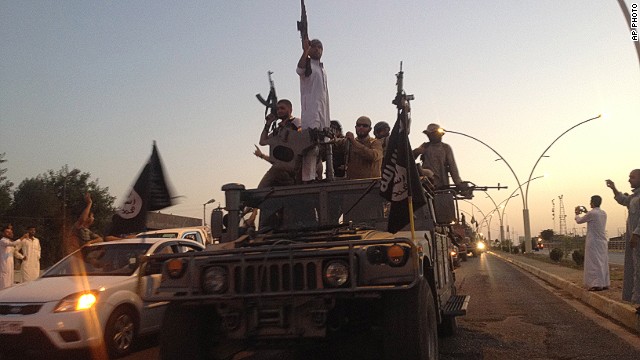 Iraq: It’s not about us

The debate over how to keep Iraq from falling apart reveals a peculiarly American kind of self-centeredness. When things blow up abroad, we often spend more time arguing about the U.S. reaction to the crisis than what triggered it in the first place.

So it is with the stunning rise of the Islamic State of Iraq and Syria (ISIS), which styles itself as a resurrected “caliphate” to which all Muslims owe allegiance. Instead of focusing on how to protect Americans and our regional partners from a new jihadist malignancy, much of Washington’s political class is consumed by recriminations over who is to blame for resurgent Sunni terrorism in the Middle East.

Is it George W. Bush’s fault for invading Iraq in 2003 and cluelessly stirring up a sectarian hornet’s nest? Or did Barack Obama squander America’s costly success in stabilizing Iraq in his haste to “end” an unpopular war?

Both indictments contain a large grain of truth. But is this really the time to be pointing fingers and rehearsing bitter debates about the wisdom of the invasion, the “surge” or the U.S. exit? U.S. leaders should leave such questions to historians and concentrate instead on mustering a coherent response to the present predicament. This isn’t a naïve plea to take the “politics” out of national security – which is both impossible and potentially dangerous – or to ignore the lessons of past mistakes. But we shouldn’t let the interminable argument over whose “lessons of Iraq” should prevail get in the way of a clear assessment of the new threat.

Washington’s self-absorption obscures a basic truth: This crisis is not about us. America is not the problem in the Middle East. The problem is the problem.

President Obama has often maintained that Bush erred in defining the problem too broadly as Muslim terrorism in general. Yet it’s clear now that, in fixating on al Qaeda, Obama has defined the problem too narrowly. The threat we face is Islamist extremism, especially in its millenarian Sunni incarnation. U.S. forces have routed al Qaeda in Afghanistan, but that hydra headed beast keeps sprouting up elsewhere: in Yemen, Somalia, North and sub-Saharan Africa, and now, for the second time, Iraq.

Washington has committed its share of errors in the Middle East, but America didn’t invent the Islamists’ violent ideology. Nor are we responsible for the endemic political chaos and bloodshed that has convulsed the region in the post-colonial era. Political Islam’s roots lie in an historic failure to establish competent and legitimate governments, with well-functioning markets, across a region riven by ethnic, tribal and sectarian rivalries.

ISIS’s rise in the Levant is beyond destabilizing. Underscoring their mad ambition to erase existing borders and revive the medieval caliphate, the rebels last week renamed themselves “Islamist State” and demanded that all Muslims show fealty to their leader, Abu Bakr al-Baghdadi. This is a direct challenge to the erstwhile leader of Sunni jihadism, al Qaeda, which has disavowed ISIS because of its atrocities against Shiite “apostates.” But Americans can take little solace in this turn of events since the Islamist State is a threat not only to Iraq, but also to America’s other friends in the neighborhood: Jordan, Lebanon, Kuwait and Israel. And of course it presents a mortal peril to Shiite Iran.

There’s no need to speculate about what life would be like in the new caliphate. In Mosul and other cities it has captured, ISIS has been perpetrating the full panoply of horrors we’ve come to associate with jihadi fanaticism – suicide and truck bombings aimed at civilians, mass executions of soldiers and police, kidnappings, beheadings and allegedly even crucifixions.

The Islamic State doesn’t appear to have America in its sights – yet. But as Obama said recently, the group poses a “medium and long-term threat to American security.” For one thing, it is bigger, better organized and richer than al Qaeda. Jihadist websites are already thrumming with excitement over its rapid advances. Western intelligence officials are especially worried about the many foreign jihadis in ISIL’s ranks, hundreds of whom hold European and U.S. passports and could readily bring the jihad home with them.

The Iraqi army, which had crumpled before the ISIS blitzkrieg on Mosul, has regrouped and has been attempting to retake Tikrit. But even if government forces can stop the rebel’s advance, few analysts believe they will be able to dislodge ISIS from Sunni regions of Iraq and Syria.

President Obama has ruled out major U.S. involvement in Iraq again. He’s also resisted pleas for U.S. air strikes from Iraqi Prime Minister Nuri al-Maliki, whom U.S. officials rightly blame for systematically alienating Iraq’s Sunni minority after U.S. forces left in 2011. Without a new and truly inclusive Iraqi government, U.S. bombing of the Islamic State will enhance its prestige with would-be jihadis and convince disgruntled Sunnis that Washington is taking the Shiite side of a regional sectarian war.

Still, the United States cannot live with an Islamist State that foments violence and instability and plots ceaselessly against our friends. A complex, two-front struggle lies ahead. In Syria, Washington must at last get serious about turning the Free Syrian Army into an effective fighting force that eventually will be able to topple the al-Assad dictatorship (abetted by Iran and Hezbollah) and then expel ISIS and other foreign jihadis. In Iraq, we will need to help Iraqi forces (backed by Iran) and the Kurds contain and weaken the Islamic State, all the while pressing for a new government willing to share power with Iraq’s Sunnis.

All this puts Obama, who promised to extricate America from Middle East conflicts, in a bind. How to get rid of ISIS without large-scale military intervention? The White House appears to be hoping for another revolt by Sunni tribes, just like the 2006-2007 Anbar “awakening” that helped U.S. forces eviscerate ISIS’s forerunner, al Qaeda in Iraq. But that may require a robust if covert U.S. counterterrorism campaign.

One thing is for sure: inaction is not an option. And whatever course Obama chooses will have a greater chance of success if it has broad public and political support back home. That’s why it’s time to move on from a bootless “who lost Iraq” debate and rally our partners in the region against the new jihadist menace.

Next entry »Repression no cure for challenge of political Islam
« Previous entryThe return of Muqtada al-Sadr?