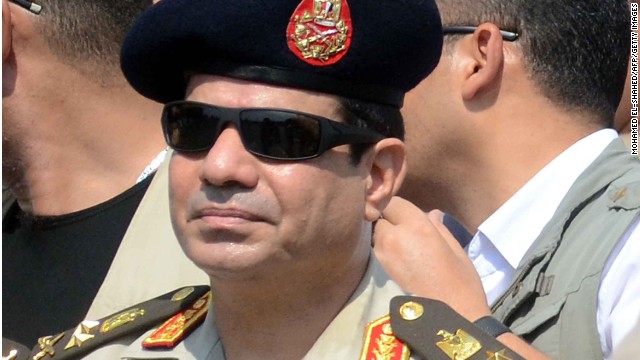 Where is el-Sisi taking Egypt?

By David B. Ottaway, Special to CNN

Editor’s note: David B. Ottaway is a senior scholar at the Woodrow Wilson International Center for Scholars. The views expressed are his own.

A year ago today, a little-known military figure of uncertain intention overthrew the first democratically-elected Islamic president in Egypt’s history, Mohamed Morsy, in the process instantly becoming a national savior for millions of secular Egyptians and an arch enemy for millions of his Muslim Brotherhood supporters.

For months thereafter, Egyptians waited for word about whether Gen. Abdel Fattah el-Sisi, defense minister and head of the Supreme Military Council, would run for president. Like the mysterious figure in Samuel Beckett’s play Waiting for Godot, no one really knew anything about him, his intentions or his vision of Egypt’s future.

Indeed, even after el-Sisi formally declared his candidacy on March 26, secularists led by “liberal” intellectuals in support of military rule made little attempt to get the general to spell out his plan for Egypt’s political future and a way out of the country’s catastrophic economic situation. For them, it was sufficient he had saved them from their worst nightmares of Islamic rule. His only opponent, Hamdeen Sabahi, was an ardent admirer of Gamal Abdel Nasser, and thus in no position to challenge the arrival of another potential Nasser-like military ruler.

As expected, el-Sisi easily won the election; he crushed Sabahi, winning 97 percent of those who bothered to turn out – officially put at 47 percent of eligible voters, although his opponents suggested even this figure was inflated. He was formally sworn in as Egypt’s seventh president on June 8.

But even though “Godot” has finally arrived, it is still unclear what he stands for. Is he Nasser incarnate?  Another Anwar Sadat, who won international fame by making peace with Israel? Or another Hosni Mubarak, whose guiding principle of not rocking the boat had kept him in power for nearly 30 years?

A weeklong visit to Cairo during el-Sisi’s inauguration found Egyptians asking many of the same questions as outsiders: What does the lackluster turnout at the polls mean for a man cast in both the state-controlled and private media as a national savior? Will el-Sisi (like the six presidents before him) shy away from imposing politically risky economic reforms? Will he continue to deal with the Muslim Brotherhood as a “terrorist organization” or seek a reconciliation?

Whatever the answers to these questions, one thing was abundantly clear – there is an overwhelming preoccupation with security within the new government. Access to el-Sisi’s inaugural celebration held in Tahrir Square, the iconic site of the Egyptian revolution, was tightly controlled, and he didn’t make a public appearance. Instead, el-Sisi spent his inauguration hosting foreign, mostly Arab, admirers and carefully selected local dignitaries.

In the first days of his presidency, el-Sisi has sought to establish a certain tone rather than specific polices and postponed hard choices, at least until after Ramadan ends in August. He went to visit a woman sexually assaulted in Tahrir Square and ordered the police to crack down on offenders, 13 of whom are about to go on trial.  He also reportedly indicated his intention to cut his own salary by half and promised to give up half of his personal wealth.

But while el-Sisi’s precise plans for the economy and political system remain a mystery, there are signs Egypt is headed for a return to a Nasser-like state-propelled economy and an even more limited, multi-party democracy than under Mubarak.

In his main inaugural night speech, for example, el-Sisi talked repeatedly of Egypt entering a “new era in the history of the Egyptian state,” the launching of “mega national projects,” and the building of “a giant economy” based on labor-intensive heavy industries.  His call on Egyptian businessmen to cough up $17 billion for a fund to “build Egypt,” meanwhile, has left some wondering where the private sector fits into his thinking, though el-Sisi promised “land and licenses” to both foreign and domestic private investors to set up new industries.

Perhaps most notably, in his hour-long speech el-Sisi hardly mentioned the word “democracy,” although he recommitted himself to parliamentary elections scheduled for the fall. So far, there is no sign he intends to replace Mubarak’s sycophant National Democratic Party (NDP) with a similar one to dominate the new parliament and gin up support for himself and his policies.

The veteran politician Amr Moussa, head of the 50-member constitutional committee that drafted a new constitution last year, has been seeking to form a broad coalition of centrist parties to support el-Sisi. But his attempt has already failed, leaving in doubt how Egypt’s new president and new parliament will work together or whether anything but a very tame opposition will be tolerated.

One thing, though, is clear – el-Sisi will not allow another independent power center to develop in the mold of the Muslim Brotherhood under Morsy.  Instead, the president made clear he intends to rule with a forceful hand in the name of a new, strong Egyptian state. “I will not allow the creation of a parallel leadership to be in conflict with the state powers and prestige,” he said, repeating three times “Egypt has only one leadership.”

But where that leadership plans to take the country remains a mystery.​