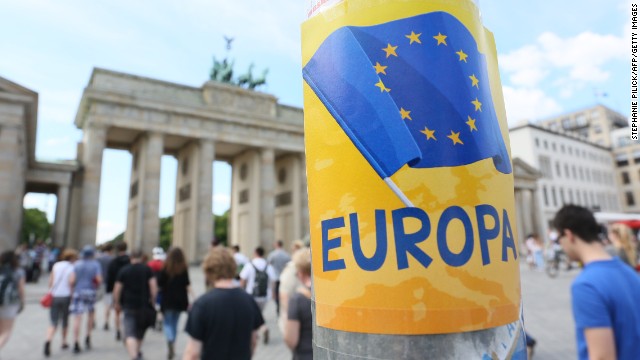 The day Europe ran into a concrete wall

By Nicholas Walton, Special to CNN

Editor’s note: Nicholas Walton is a journalist and writer. The views expressed are his own.

Some might remember it as the moment when the European Union began to unravel. Others, simply as the moment when Europe’s leaders, individually and collectively, decided to run head first into a concrete wall. Regardless, last month’s EU summit began in Ypres and was fittingly redolent with the symbolism of 1914, when European leaders blundered into a war that few wanted. A century later, they are heading for a situation that nobody wants, thanks to the coronation of a former prime minister of Luxembourg.

For outsiders, this might all take a bit of explaining. But at its core is a bout of political arm wrestling between those who champion the accumulation of more power in the EU institutions, and those who believe that the whole European project needs a rethink.

Those in favor of reform appeared to get a shot in the arm from recent European elections that handed anti-EU populists sweeping gains across much of the continent. But then an arcane wrangle began over how one of the top European jobs – the president of the executive, the Commission – should be appointed.

Instead of letting European leaders come up with somebody to fill the post, members of the European Parliament said they would instead make the pick. Whichever group in the parliament had the most seats would see its bloc’s leading candidate (known as the Spitzenkandidat) assume the post. This, they argued, would introduce democracy into the process, help build pan-European political awareness, and arrest an alarming slide in voter turnout.

Unfortunately, TV debates featuring the various Spitzenkandidaten garnered viewing figures that would embarrass an episode of Luxembourg’s Got Talent. And, once the election was over, members of the European Parliament demanded that the Spitzenkandidat of the center-right bloc, standard bearer of the status quo and former Prime Minister of Luxembourg Jean-Claude Juncker, be given the powerful European commissioner job – all in the name of democracy.

The days and weeks since their decision was announced have not been pretty. British Prime Minister David Cameron immediately took a stand against Juncker, a move that went from hopeful to hopeless in as long as it took the German chancellor, Angela Merkel, to change her mind in the face of domestic pressure. One by one, Cameron’s erstwhile allies in favor of a reformed Europe appeared to do what Merkel wanted, and by the time the 28 leaders met in Ypres, Cameron was in a quixotic minority of two, along with Hungary.

The choice of Juncker is a disaster for every country.

Cameron is the most obvious casualty. His truculent opposition to Juncker turned the whole debate into an argument between the European project and those tiresome rejectionists across the Channel. His tactics were naïve, he ended up being deserted by potential reformist allies like Sweden and the Netherlands, and his stand won’t have helped his future relationship with Juncker. This matters because Cameron has promised an in-out referendum on Britain’s EU membership if he wins the next election, and was no doubt hoping to use this leverage to secure some vital reforms to the European Union before then. Instead, despite some domestic admiration for his stand, he has pushed Britain closer to the exit door.

This alarms the other pro-reformers. An EU without Britain will be less likely to change its ways, and the center of gravity in the Union will shift southwards. With this in mind, reformist countries are trying to pick up the pieces and find a way to rebuild bridges with Britain, especially as most other countries were just as reluctant to see Juncker get the top job as Britain. What unites this group with those rather happier to see Britain fail (think France and its allies) is a deep unease that the whole affair was decided, in effect, by Germany.

In fact, the reality is that the Juncker affair was a naked display of German power. True, the euro crisis always underscored the importance of Berlin. But this episode has made this all the clearer, while at the same time exacerbating frustrations already evident among southern European nations who largely blame Germany for forcing austerity on them.

In short, the EU has now seen a boost in power for a European Parliament that seems to love accumulating power in Brussels, the filling of a top job with an old-fashioned proponent of something like a United States of Europe, and increased the prospect of Britain heading off into the sunset. And while Cameron and Merkel might come off worst from this series of events, growing disillusionment with an increasingly out of touch European leadership threatens to undermine the whole project.

The dark days of the euro crisis prompted many critics to question whether the European Union could act as a coherent and responsive entity. The events of the past few weeks have only strengthened their case.

Topics: Europe
Next entry »Why the Export-Import Bank matters
« Previous entryIdentity trumping ideology across the globe