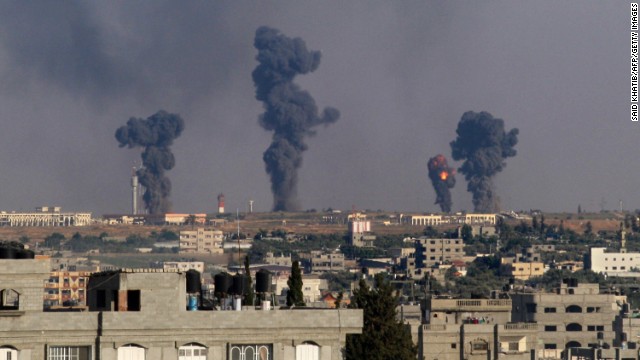 Zakaria: Flare-up in Gaza violence will be hard to stop

CNN speaks with Fareed Zakaria about the escalating violence in Gaza following the kidnappings and killings of Israeli and Palestinian teenagers in the past few weeks. This is an edited version of the transcript.

The fact that the teenager who was beaten by the Israeli Police, an American citizen – how much could that, or should that, change the U.S. posture on this unfolding very serious, potentially very deadly situation in the Middle East?

It changes it a lot. As you know, the way in which the United States reacts varies very dramatically depending on whether the people involved – whether killed, wounded, hurt – are American citizens or not. Now this means that the American embassy has to be involved. It means the State Department has to be involved. It means that potentially congressmen might get involved, senators might get involved.

And in general, there’s going to be a heightened media scrutiny, inevitably. And all of that’s going to make an already raw situation even more difficult to handle.

And now we see these rocket attacks from Hamas and Gaza. Israeli air strikes into Gaza. The more one side attacks the other side is inclined to hit back. How concerned are you that this escalation of rockets and air strikes will escalate into another all-out war, if you will?

A lot of times you see these kind of flare ups you don't know whether anything is going to happen – most of it doesn't flare up. In this case, what's happening is on both sides, there’s an internal compulsion and an internal dynamic which is pushing them to a confrontation that maybe they don't rationally want.

By that, I mean if you look at Prime Minister Benjamin Netanyahu, he has already lost his foreign minister and the support of a right-wing party. There's pressure for him to act from the right. If you look at Hamas, Hamas, as you know, hasn’t been doing particularly well over the last few years. It has been losing out to more radical, more militant alternatives. So they feel the need to do something.

Neither side can try to do something cooperative at this moment. So it almost reminds you, in a very small microcosm, of the events that led to World War I, when nobody rationally wanted a conflict but nobody could find the way to back down because they were being pushed by the internal dynamics. That seems exactly what's happening here.

So it's difficult to see how this stops. At what point does one of the sides say, you know what, let's have a moment where we make a preemptive concession. We do some kind of peace talks. That's not in the cards right now.

The U.S., as you know, doesn't deal with Hamas. The State Department regards Hamas as a terrorist organization. Last time there was a war, if you will, between the Israelis and Hamas in Gaza. The Egyptians brokered a ceasefire. Who could do that now?

Well, it's more difficult now because General el-Sisi and the new Egyptian government have very poor relations with Hamas. They've actually cut them off in various ways. So it's tough to imagine that dynamic playing itself out well. The United States has, of course, no contact with them. So perhaps you'd end up using somebody like Qatar or Saudi Arabia.