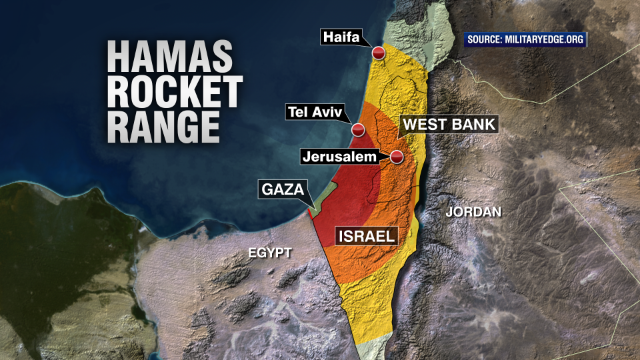 How should Israel respond to Hamas?

Fareed hears from Wall Street Journal columnist Bret Stephens and Council on Foreign Relations President Richard Haass about the latest flare-up in violence between Israel and the Palestinians.

Bret Stephens, The Wall Street Journal has an editorial that says the only solution here is to completely destroy Hamas, and The Journal advocates a land campaign, Israel to go back into Gaza with troops, which would inevitably mean there would be some kind of temporary occupation of Gaza.

Stephens: Well, not a full occupation of the Gaza Strip. But what I do think is right is that Israel has to occupy the territory that separates Gaza from Egypt, because what we've found now is that Hamas is firing much more sophisticated rockets into Israel, with ranges that are extending beyond Tel Aviv, up to Jerusalem, and Haifa. And that's unacceptable for any state to deal with that, whether these missiles are accurate and hitting their targets or not. And the problem you have had is that this is now the third time Israel has gone to war since it withdrew all of its settlements and all of it settlers from the Gaza Strip in 2005.

You have this pattern of recurring violence. I don't think, in the long run, that's a smart and acceptable strategy, to allow Hamas to remain in Gaza with a power base. Obviously, you can't eradicate it entirely, but you can eradicate it as an effective fighting force and as a political entity. And, by the way, one of the beneficiaries of that kind of action would be Fatah, would be Mahmoud Abbas, because what I think Hamas is trying to do, I think the strategy here is to gain the upper hand in intra-Palestinian politics by attempting to start a third intifada.

Is it a smart strategy to start a land campaign? It would cause a lot of international consternation, to say the least.

Haass: You can do some things militarily against Hamas, but there's no way you can destroy it, either politically or militarily. Hamas is sitting on 10,000 to 12,000 rockets that can now reach more and more inside Israel. So just say you get rid of 25 percent. That still leaves 8,000 or 9,000 missiles. You can't destroy them militarily. Politically, that would probably strengthen Hamas. They would then be up there saying “we're the real source of resistance”.

What you've got to do more than anything else, I think, is think about how do you weaken them? The only way I know of weakening them is to strengthen Fatah. And that's the opportunity of reaching out. If Netanyahu wants to do something, I would say put out some big ideas on the table. Give something for Mahmoud Abbas and Fatah to work with. Split Hamas away, break the coalition between Hamas and Fatah and basically say, only these people can deliver, you, Hamas, can only bring misery down on the Palestinian people. So be tough with them, but put forward a serious diplomatic alternative. That’s the only hope.