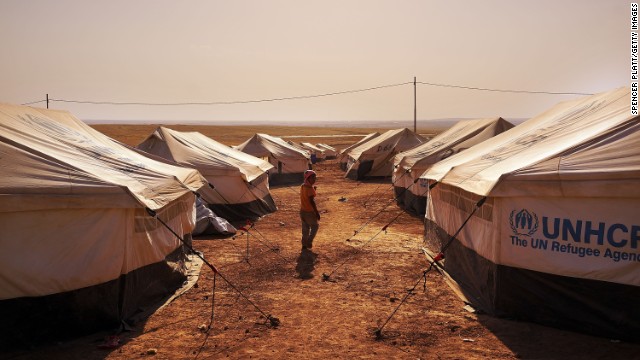 By Amal Mudallali, Special to CNN

Editor's note: Amal Mudallali is a senior scholar at the Wilson Center. The views expressed are her own.

The conventional wisdom in Washington is that Iraq is heading for partition. The argument is that Iraq is on the cusp of being broken into three states: a Sunni, a Shiite, and a Kurdish state to replace the current state of Iraq. But while many of the proponents of this view contend that the Iraqis themselves want this because they simply cannot live together, I believe nothing could be further from the truth.

Sunni Iraqis do not want to be separate, they want to be equal. And for the Shiite Iraqis, the definition of equal is for Iraq to remain whole, but under a Shiite-dominated government. These views may appear somewhat inconsistent, but a regional and international coalition that sees the dangers of dismembering Iraq two sides should be able to help them walk back from their positions.

I know this is possible because Lebanon, another Arab country that suffered a bloody 15 year civil war, managed to step back from the abyss through a political settlement. Thirty years after the end of that civil war, and despite the suicide bombings that have blighted the country in recent months, Lebanon is still united.

Of course, Iraq faces its own, specific challenges. Sunnis cannot forget that they once ruled the country through a strong man, and the Shiites cannot bury their grievances over the Saddam Hussein era. Meanwhile, it is clear that the sectarian system that became the unintended consequence of the U.S. invasion of Iraq from 2003 isn’t capable of building a new Iraq, and is instead a recipe for continued civil wars.

These shortcomings were compounded by the sectarian and dictatorial tendencies of Iraqi Prime Minister Nuri al-Maliki and the political class that surrounds him. Under the al-Maliki view, the Sunnis were to pay for all the sins of the Saddam era, so instead of bringing them under the big Iraqi tent, his regime pushed them to the margins.

As a result, Iraq’s Sunnis have for the past 18 months been in near constant revolt while Washington seemed to be looking the other way. They conducted sit-ins, but instead of addressing their grievances, the al-Maliki government responded with bombs, killing dozens in the process. Such policies drove Sunnis into the arms of radical Islamist groups and ultimately to a temporary alliance with the Islamic State of Iraq and Syria.

The militants’ seizure of Mosul and other Sunni strongholds should therefore not have surprised anyone in Washington. What was surprising was the belief that what has not worked for most of the past decade will somehow work now. The rush in advocating a military and security solution, as al-Maliki has done, won’t resolve Iraq’s problems – security only approach won’t be enough to bring all the components of Iraqi society together.

What is needed is a political solution that keeps Iraq whole, including ensuring the Kurds are an integral part of the country. And the Kurds are not only patient but also realistic – they know the current regional restraints on Kurdish independence and recognize they will be best served by a new Iraqi leadership that keeps its commitments to them.

For the Sunnis, living in a united Iraq is better than the alternative – existing in an extremist and oil poor caliphate, as Iraqi oil is concentrated in the Shiite south (comprising 70 percent to 80 percent of Iraq’s oil reserves) and the Kurdish areas. In addition, it is hard to imagine that Sunni Iraqis – politically or culturally – would prefer to leave a united Iraq. After all, Baghdad is not just the current capital for Sunnis and Shiites alike – it has a rich identity and history.

Fighting extremism is important for Iraq’s stability, but it will not bring unity and it cannot be done by Shiites alone. The Sunnis have to be part of the fight if Iraq is to stay one country.

So where do we go from here?

Iraq’s Sunnis are by no means all behind ISIS, but they are caught between the rock that is the al-Maliki government and the hard place of the new caliphate of ISIS. Time is therefore not on Iraq’s side, and any delay in forming a new government with a fresh face plays into the hands of al-Maliki and those who have used his intransigence as an excuse to split the country.

A good recent sign that Iraqis are determined to step back from the chaos is the election of Salim al-Jabouri as the new speaker in parliament. His election is the first step in a political process to forming a new government and illustrates that the Sunnis can accept a compromise, as they had previously made the departure of al-Maliki a precondition of joining the political process. The Sunnis apparently prefer to stick with the Iraqi state that they know over the unknown of the Islamic state.

Yet despite the majority of the Shiite leadership in Iraq, including the religious Shiite leadership, wanting a new government, a major obstacle remains in the way of convincing al-Maliki that his time is up: Iran. Sadly, Iranian support for al-Maliki is mirroring Tehran’s support for Syrian President Bashar al-Assad. Syria, Iraq, and even Lebanon now appear to be viewed by Tehran as a single theater of operations in which to challenge the West.

The Obama administration has sent the right message to Iraq by encouraging the formation of a government of national unity and inclusiveness. But the United States must not allow itself to again get embroiled militarily in an Iraqi civil war. Instead, this should be viewed as a political fight to try to put Iraq back on the right track in a way it failed to a decade ago.

It isn’t too late to save Iraq, but this cannot happen by tearing it apart. The Arabs still feel betrayed by the Sykes-Picot Agreement that split them into states nearly one hundred years ago. Dividing them into tribes and sects with flags today would be the ultimate betrayal.