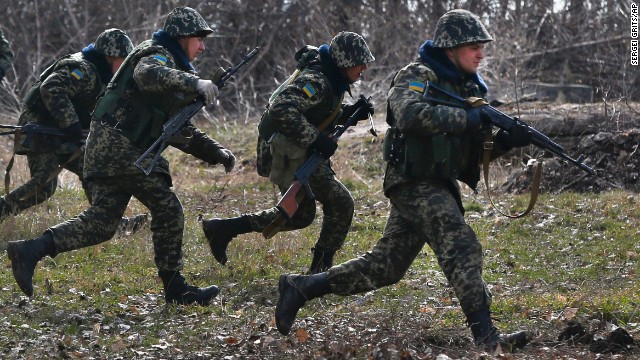 Welcome to an amoral world without just wars

By Leon Aron, Special to CNN

Editor's note: Leon Aron is a resident scholar and the Director of Russian Studies at the American Enterprise Institute. The views expressed are his own.

Two wars – one in Gaza the other in eastern Ukraine – are unfolding simultaneously. They have nothing in common except this: both should be being seen as unambiguous in terms of which side is right and which wrong. And second, both are likely to end in a strategic (i.e. long-term) defeat for the right side because of the attitudes that shape the approach of Western leaders to both wars.

The facts are not in dispute. In Ukraine, the legitimate government in Kiev is trying to restore Ukrainian sovereignty over its territory, in practical terms seized by Russia in a proxy war using professional special troops, intelligence officers and mercenaries (kontraktniki) to train assorted thugs known collectively as "rebels" or "separatists" who are being armed and supplied by Russia.

In Gaza, Israel is battling a fundamentalist terrorist organization dedicated to killing Jews, Christians and gays and oppressing women. As in Ukraine, they attacked first, by firing hundreds missiles at Israeli cities and towns.

Yet in neither case has the justness of the causes led the "West" to wish for a victory by the "right" side, rather than a "truce" or "ceasefire," which, as everyone knows, the "wrongs" are going to violate as soon as they recover, regroup, and resupply.

Two reasons in the post-modern canon could provide an explanation. First, while someone's victory implies someone's defeat, "peace" – no matter how fraudulent or short-lived – superficially has no losers, and for that reason is vastly preferable. Second, the "right" and "wrong," the "just" and "unjust," the "good and evil" are inherently suspect because values themselves are suspect. Western opinion makers appear to have learned from elite universities that "values" are "individual" and "subjective." As a result, they must be taken out of political discourse and decision-making. Hence, too, the coverage by the elite media of the West of both wars as "conflicts" in which the word "just" or its synonyms never once appear, both sides are somehow equally at fault, and therefore a victory by one side is not more morally agreeable than by the other.

So strong are these ideological imperatives that not even a tragedy can influence them. Neither the downing of the MH17, almost certainly by a Russia-supplied surface-to-air missile, nor the murder of three Israeli teenagers nor repugnancy over the deliberate sacrifice of civilians by Hamas can introduce morality into these wars and make victory over evil preferred to peace.

The death of just wars isn't merely a reflection of the prevailing Western mentality. When tragedy isn't recognized as a moral phenomenon, which would assign guilt and causes to punish the guilty, more tragedy ensues and more death.

In the two wars I mentioned, the "operational" consequences of this zeitgeist are perfectly obvious. If Ukraine is to renew its successful offensive, which it unilaterally suspended for several days after the downing of the MH17 to facilitate access to the crash site, and suspended again for one day yesterday for the same reason, then the Kremlin – which for domestic political reasons cannot afford a defeat in Ukraine – is bound to cry "fratricidal civil war." It will then likely call for an immediate ceasefire (which of course leaves its proxies in control of what they hold today) and can be expected to threaten to move regular troops across the border to "protect innocent civilian lives."

To prevent Russia's direct aggression (and thus the need to impose additional sanctions that may be politically uncomfortable for the EU members) the "West" will put pressure on Ukraine, which, as before, will announce a unilateral ceasefire. There may even follow, as demanded by Russia, direct negotiations between a democratically elected government of one of the largest European countries and violent mercenary thugs. That is, until the "rebels" again attack a high value symbolic target – as they've done with the Donetsk airport – and the "cycle of violence" (a sterile, value-free term) will start again.

In Jerusalem, as in Kiev, Israel will be forced to accept a ceasefire by U.S. diplomacy, which ipso facto equates a vibrant democracy with a theocratic dictatorship by fanatical terrorists. Hamas will rebuild the tunnels, will replenish its arsenal of missiles, and then will begin anew abducting or murdering more Israeli civilians and soldiers and shooting missiles at the Jews.