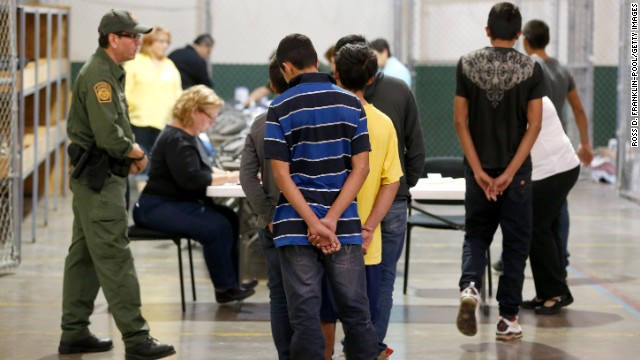 What we're getting wrong about the migration debate

GPS intern Kevin O’Donnell speaks with Justin Gest, assistant professor of public policy at the School of Policy, Government and International Affairs at George Mason University and the author of ‘Apart: Alienated and Engaged Muslims in the West’ and the forthcoming ‘Crossroads of Migration: A Global Approach to National Policy Differences’. The views expressed are his own.

When we talk about migration, we often talk about push factors and pull factors – things that drive people from a country, that pull them to another. We’ve seen over the past five years a rapid increase in migration by children. Is this driven more by factors in their home countries, or by a new understanding of opportunities in the United States?

So while the pull factors in the United States are important, they’re not a determinant here. One way of actually noticing this is by looking at the net migration from Mexico and Central America over the last five to seven years since the economic decline of the United States. It has declined, at one point to zero. So this is taking place at a time when we haven’t seen a lot of draw by the American economy, which further substantiates the idea that this is truly push-factor oriented.

A lot of your work deals with ethnic enclaves formed by immigrants. How is this influx of very young people going to change the face, the identity of the Latino community in the United States?

At the moment they’re not going to change the face of the Latino community whatsoever because they’re currently in detention centers. They don’t have the opportunity to join families, friends, or community organizations that could help them in an ethnic enclave.

Given that the United Nations has determined that about 70 percent of the children coming here qualify as people in need of asylum, how does that change how we need to respond? At what point do we need to say this is a refugee crisis, we need to treat it as such? What international norms does the U.S. need to adhere to?

First, just because an immigrant qualifies as a refugee according to the United Nations definition doesn’t necessarily mean they will qualify as a refugee at the level of the United States. The U.S. has its own criteria that it imposes on the determination of whether an immigrant qualifies, and while influenced by U.N. standards, it’s up to national courts and the national administrative system.

If the United Nations or any observer determines that these immigrants are fleeing a situation that involves their persecution or near-certain death or otherwise endangerment in their home country, then there is a norm of non-refoulement to not return the immigrant to their country of origin where they are endangered. But some countries have quotas. So if you have a quota, it doesn’t matter if someone qualifies, you’re not going to let them in.

Do you think those restrictions need to change? Do we have a responsibility to look at this situation again with the knowledge that these are children and change the way we handle immigrants?

So we did change the way we manage these kinds of situations with the trafficking law that was passed by Congress in 2008 under George W. Bush. In many ways, this is a sensible law in that it assures due process for each immigrant and an independent evaluation of their circumstances to determine whether they qualify for admission under humanitarian dimensions of the law. So the United States has laws that ensure due process. The problem is we don’t have money to ensure the execution of due process, hence President Obama’s request for nearly $4 billion from Congress.

President Obama has run up against a serious wall there. Why can’t this get through? The standard narrative is that Tea Party members of Congress don’t want to see anything that looks like amnesty. Could you expand on what the president is working with in Congress?

Partisans are misconstruing the arrival of undocumented minors in two ways. First, they are being construed as undocumented immigrants who are seeking amnesty. That’s only true insofar that these undocumented immigrants are seeking amnesty in the humanitarian sense, rather in the sense of [asking for] capitulation by the United States government. This is not granting amnesty [in the sense that] the American government is forgiving a crime. It would be from the acknowledgment that [the immigrants] are legitimate asylum seekers with legitimate claims to refugee status.

The second way this is being misconstrued is that partisans are equating the funding of due process with support for undocumented migration. And they’re two completely different things. Funding this law is supporting the processing of these migrants’ claims. It isn’t supporting these migrants’ admission into the United States, it’s not supporting their residency, it is not legitimizing undocumented migration. It’s simply funding a federal program that was legislated by many of the same congressional representatives a short six years ago

So those two misunderstandings are very important. However, politics is intervening, because supporting the President’s request appears to suggest that congressmen are agreeing with his preferences or agreeing with his stances on immigration – particularly on the treatment of undocumented migrants – which most Republicans do not want to demonstrate.

Another critique is that Obama’s policy has created this massive amount of misinformation in parts of Central America, where many of these children come from, leading them to believe it will be easier to come to this country. Is that a valid criticism?

For centuries, the United States’ treatment of immigrants has given hope to many prospective migrants that they will be treated with fairness, generosity, and dignity if they were to come to the United States. So if Obama is guilty of this, I would say we as a country have been guilty of this for a far longer period. It’s for that reason that we’ve been the destination for not only economic, student, and family migrants for generations, but also the destination for humanitarian migrants. So this works in the same way now as it did when many Germans or Jews or anti-Communists were coming in the middle of the 20th century both during and after the Second World War. So I don’t think that’s a fair criticism.

The important thing to recognize is that the undocumented minors who are coming aren’t coming because they can’t wait to get away from their parents. They’re not coming because they’re seeking employment opportunities. They’re coming because their lives are in danger or they perceive their lives to be in danger, whether by poverty, war or otherwise in their countries of origin. Even if President Obama hadn’t executed Deferred Action for Childhood Arrivals, even if President Obama hadn’t demonstrated an open-minded or overly-generous stance on immigration these past six years, these immigrants would be coming right here to the United States in any case. If George W. Bush was still president [under these same circumstances], they would have come to the United States six years ago. And it’s not just because of how generous the United States appears, it’s mostly because of the circumstances back home.

You come from an academic background. What do you think the media is missing when it talks about migration and amnesty?

We’re missing two things. One is the history of the United States as a destination for refugees, and the issues that we have with palatability according to the race, religion, ethnicity, and circumstances of our refugees. If this were a famed chemist who was fleeing Russia because he or she was being persecuted by [the government], then I think the United States would welcome that famed chemist with open arms. But if this is an impoverished, indigenous Guatemalteco who comes from a village that has been decimated by poverty or famine, we have a different approach, and I think we have to look ourselves in the mirror and ask, “Why?”

Next entry »On GPS Sunday: The latest on the Middle East, a look at Ukraine, and understanding Ebola
« Previous entrySikorski: New Europe sanctions 'will get President Putin's attention'