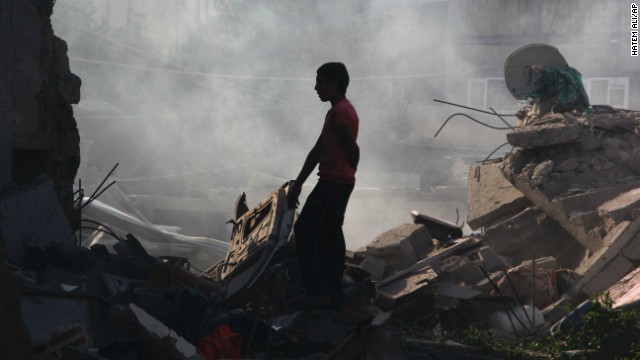 Time for Israel to face up to only path to peace

By Sultan Barakat, Special to CNN

Editor’s note: Sultan Barakat is director of research at the Brookings Doha Center, and Chairman of the Post-war Reconstruction and Development Unit, University of York. The views expressed are the writer’s own.

Israel’s repeated wars on the Gaza strip have taken a heavy toll on Palestinian civilian infrastructure, and this latest offensive is no different. Israeli shelling first damaged, then destroyed Gaza’s only power plant, while waves of attacks have shredded power lines and ruptured sewage systems. Indeed, the U.N. Office for the Coordination of Humanitarian Affairs (UNOCHA) estimates as much as two-thirds of the enclave’s population of 1.8 million now lacks or has very limited access to potable water or sanitation services.

But such disregard for basic civilian infrastructure will ultimately prove counterproductive – if Israel genuinely wants a lasting solution to the conflict, it must be made to appreciate that the reconstruction and development of Gaza, not its utter destruction, is crucial.

While the death toll in the strip has continued to climb – even if the current cease-fire holds, it has hit more than 1,800, mostly civilians – the most basic requirements for any kind of dignity and quality of life are being destroyed, and more than 425,000 have been left homeless by the actual or threatened demolition of their homes. Yet the destruction of Gazan infrastructure began long before the first airstrikes and rocket launches of the present conflict. The tiny enclave, measuring about 140 square miles, has been under effective siege since 2007, turning it into what is in many respects the world’s largest open-air prison – even construction materials such as the cement, steel and pipes that are needed to expand the enclave’s water treatment system are banned under the embargo.

And yet members of the international community are at best standing aside, and at worst fuelling the conflict. The United States, for one, has poured hundreds of millions into Israel’s “Iron Dome” missile defense system. But while the U.S. may have been hoping that shielding Israeli citizens from the fallout of the siege on Gaza would avert the scenes of disproportionate collective punishment that we have seen on our TV screens in the past, U.S. assistance has in fact had the opposite effect, producing an emboldened Israeli sense of invincibility.

Israeli talking points inevitably focus on when the last rocket was fired from Gaza, or alternate between touting the precision of Israeli Defense Forces bombardments while making excuses for direct hits on civilian infrastructure. Unfortunately, such justifications for prolonging the campaign have been successful in securing support at home – a recent poll showed more than 95 percent of Jewish Israelis believe the current war is justified. Yet despite such strong domestic support, the international opinion appears to be shifting against Israel – five Latin American countries have withdrawn their ambassadors to Israel over the past week.

With all this going on, it is understandable that most aren’t considering what will happen in the aftermath of an eventual truce. But if the previous two Israeli offensives are any guide, then we can expect calls for the charitable rebuilding of Gaza, with Israel suggesting it is prepared to support reconstruction efforts in return for the disarming of Hamas and other militant groups. The Palestinians won’t accept this, and Israel can then be expected to impose its own reconstruction agenda, further extending the suffering of civilians.

This is not acceptable. Estimates of the economic toll of the damage from this war are in the region of $3 billion, far more than the annual GDP for the Gaza Strip. With that figure in mind, it is high time that the international community calculated the economic, social, and human costs of this latest conflict and presented Israel with the bill, which would at the very least confront Israelis with the true cost of this latest round of destruction.

Israel is, of course, unlikely to be inclined to lift a finger to help develop the Gaza strip. Indeed, it clearly prefers an underdeveloped ghetto to a viable foreign country on its borders. Yet if the Israeli government cannot be convinced that economic opportunity and the chance of a stable life – rather than a continuous cycle of violence and reconstruction – will help address the root causes of the conflict, then it is time for Israel to step out of the way entirely.

If Israel is determined to wall itself off from the enclave, then the international community should ensure that Gaza at least has access to the outside world. Lifting the siege is a key demand of Hamas, and at a bare minimum, the strip needs access to the sea, with regularized shipping activity not subject to an Israeli blockade. Egypt, too, should be targeted by the international community to ensure that the Rafah border crossing remains open – stable, regulated commerce with the Gaza strip will do more to undermine the illicit tunnel trade than any number of Egyptian demolition operations.

For the population of Gaza the miseries of wars in 2008-9, 2012 and now 2014 have been compounded by the grim drama of watching reconstruction efforts stall and then effectively get reset. If the cycle of violence is to be stopped, then Gaza needs time and diplomatic space under international protection to pursue a long term program of development. The question is how long it will take Israel to realize that this is the only path to a lasting peace.

Next entry »What I'm reading: Will U.S. help the Kurds fight ISIS?
« Previous entryTurkey's debate on women no laughing matter

Tune into @CNN tonight @ 9pm ET for my latest special, “Inside the Mind of Vladimir Putin” It’s an in-depth twitter.com/i/web/status/1…st2uickH
fareedzakaria

3:36 pm ET May 21, 2022 RETWEET
Tonight @ 9pm ET on @CNN: What has shaped Putin? My latest special, “Inside the Mind of Vladimir Putin,” explortwitter.com/i/web/status/1…em1q5K
fareedzakaria