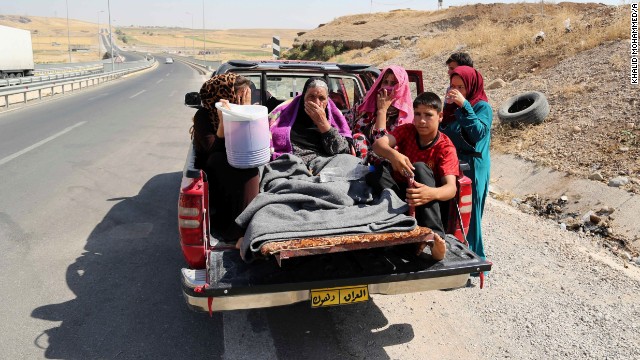 CNN speaks with Fareed Zakaria about Iraqi President Fuad Masum's decision to nominate a new Prime Minister on Monday. This is an edited version of the interview.

Nuri al-Maliki, the current Iraqi prime minister, may not go quietly. He may try to use the forces loyal to him to effectively engage in some sort of coup. What's your analysis?

My own sense is that he won't do that. There are many, many forces within the Iraqi political system that would be very strongly opposed to them. Most importantly, Grand Ayatollah Ali al-Sistani, the chief Shiite cleric of Iraq, has always been clear that Iraq needs to be on a democratic path. You remember early on, when we were watching Iraqi politics begin, Sistani was very clear on the need for elections, for democracy. So I would suspect that he would come out strongly opposed to this. And in that case, al-Maliki's support would collapse.

Indeed, Al-Maliki's support has largely collapsed. What he’s now holding onto is the thin reed that says technically he was meant to be asked first because he's the leader of the largest bloc. That's an academic issue because his bloc, the support, has disintegrated. I would suspect he might mount some kind of legal challenge, but he won’t try to use his position as commander in chief to do what you rightly say would be effectively a military coup.

So let's see what he does in the next few days. Haider al-Abadi, the nominee to be prime minister, is a Shiite. Can he unite the country? There's a Kurdish new president. There's a Sunni speaker. Can this group effectively take Iraq to a position that all of us had hoped it would be at, but clearly has not reached.

That's the million dollar question because what we have focused a lot on is the fact that al-Maliki is the bad guy, he didn't reach out to the Sunnis and, you know, we need change. And that's true. Al-Maliki has been a very sectarian and also somewhat incompetent leader. But there’s a larger sectarian dynamic in Iraq, which is to say al-Abadi is himself a Shiite from the same party that al-Maliki is from. The party is a pretty tough, hard line party. These guys spent most of their time in Iran before, in exile. So they're often somewhat pro-Iranian. They're pretty tough in terms of viewing themselves as Shia first and Iraqi second.

The other positions in the government aren't very important – the speaker and the deputy speaker and all these positions. So what we've seen in the past is, you have a lot of personalities and you have the right ethnic mix, but it doesn't matter because the dynamic of the system is making the Shiite politicians act more sectarian. That makes the Sunnis act more sectarian. The Kurds essentially trying to retain their independence. So I'm not very hopeful.

I think that it might be better. But you have a sectarian dynamic at work in Iraq. If you just look at the people who are guarding these various groups, it's the Shiite soldiers who are essentially guarding the Shiites. The Sunnis are more in the Sunni areas. Even the army, in other words, has fragmented into kind of sectarian units.

I think there's a lot of wisdom there. I think people do need to take a second look at what Joe Biden was suggesting, which was, by the way, to be fair to him, a loose federation. He always understood you couldn't really partition as cleanly because, as you know, the middle of the country, which would be the sort of Sunni land, is actually full of Shias. Baghdad has lots of Shias in it.

So how would you do it? Historically, the way these happen is you have a certain amount of ethnic cleansing. In other words, the Sunni leave the Shia areas. The Kurds are, in any case, pretty much sealed. Maybe there's going to be a great sorting out in the Middle East. It's very sad to see. But think about what's happening. Hundreds of thousands of Christians have already left Iraq, even before these latest strategies. You've seen Christians flee Syria. You're seeing Kurds flee Syria. You're seeing the Sunnis flee out of Shia areas.

Topics: Iraq
Next entry »Has Colombia's time come?
« Previous entryHave Americans given up on space?

Next entry »Has Colombia's time come?
« Previous entryHave Americans given up on space?