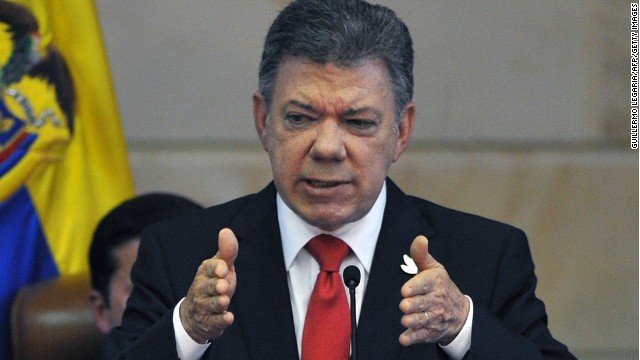 Editor’s note: Virginia M. Bouvier is senior program officer for Latin America at the U.S. Institute of Peace and editor of Colombia: Building Peace in a Time of War. The views expressed are the author’s own.

With violence exploding in Gaza, airstrikes in Iraq, armed groups terrorizing Nigeria, Syrian extremism spilling into Lebanon, and the return of war in Sudan, the cause of peace can seem daunting. Closer to home, however, there is cause for hope.

Prospects for peace in Colombia are looking better than they have in years. If successful, the current peace process would put an end to an internal armed conflict that has lasted half a century. The conflict has taken the lives of some 200,000 Colombians, forcibly displaced 6 million more (granting Colombia the dubious honor of world record holder for the highest number of displaced), and destroyed countless livelihoods. Peace in Colombia would open a new era for growth and prosperity and contribute to regional stability.

As President Juan Manuel Santos noted in his inaugural speech on August 7, “Colombia’s time has come.”

During his first term in office, Santos opened peace talks with the Colombian Revolutionary Armed Forces (FARC-EP), and earlier this year launched exploratory conversations for peace talks with the National Liberation Army (ELN), Colombia’s second largest armed insurgent group. His campaign for re-election was widely portrayed as a referendum on the peace process, and his victory in June gives him a mandate to finish what he started.

On August 12, talks with the FARC entered their 27th round, and the Colombian government and the FARC have now reached preliminary agreements on the first three of five substantive agenda items – rural agrarian development, political participation, and drugs – and are deep in discussion on the remaining substantive items, including victims and the end of the conflict. A sixth and final agenda item will address the mechanisms by which the Colombian population will endorse any agreements reached.

These are not easy issues, bumps may still come along the way, and a final agreement is in no way guaranteed, but the prospects for reaching agreement look good.

For decades, the United States invested resources in building the capacity of the Colombian government to defeat the numerous insurgencies. In the last 15 years, the United States provided Colombia with more than $9 billion under Plan Colombia, mostly to the Colombian military and police. But with a peace process in place and a resolution on the horizon, the U.S. must reorient its policies to winning the peace, and a new peace policy should build on lessons learned in conflict zones and peace processes around the world.

Policymakers should keep in mind the following:

1. Peace processes are key moments to promote democratization and more just structures, overdue reforms, and greater equality. But if the window of opportunity for social change is missed, such processes can solidify patterns of injustice and exclusion, and make change more difficult and a return to violence more likely.

2. Spikes in violence, which are often efforts by armed actors to gain leverage at the peace table or actions by disgruntled sectors to sabotage the process, have derailed many a peace process. They have also been used to catalyze support and underscore the urgency of ending the violence through the peace process.

3. Maintaining peace requires patience, commitment, and managing expectations.  Peace accords rarely come easily and often take years to be signed. Implementation of the accords can take even longer, and attitudinal change won’t happen quickly. Carefully cultivated hostilities toward groups don’t disappear overnight, and victims terrorized by war don’t suddenly shed their trauma with the signing of a peace accord.

4. Half of all peace accords fail within the first five years after they are signed. Autonomous, independent civil society organizations, including especially women’s organizations, are key guarantors of peace. They can hold the parties’ feet to the fire until they sign (as did the bold women of Liberia, who locked the negotiators in until they reached a peace deal). They can participate in education efforts to ensure acceptance and legitimacy of peace accords by the populace, and they can monitor and verify that the parties comply with their commitments once an agreement is signed. Early and consistent support for these organizations is critical, particularly given that levels of implementation prove to be a key indicator of whether a conflict will reignite.

5. A successful peace process will need to ensure that those who lay down their weapons are able to have a political voice and that the dignity and rights of the victims are restored.

6. The unfinished business of peace processes can have high costs. Addressing underlying structural inequities that cause violent conflict and allow it to persist may take more time, but this approach is more likely to reduce violence in the long run. The recent waves of Central American children into the United States remind us of the consequences of letting deep social and economic inequities go unattended.

7. Investments in truth-telling, justice, reparations, and reconciliation processes will help guarantee that peace will be sustained. The United States has played a role in supporting truth-telling processes, both financially and by declassifying relevant documents for truth commissions and historical memory processes, in Guatemala, Chile, Peru, El Salvador and other conflict zones. Such support for truth-telling processes could play an important role in Colombia as well.

As the United States realigns its priorities toward peace in Colombia, it should be at least as generous in the transition to peace as it has been in supporting the execution of the war, and it should be clear that it is in for the long haul. Supporting peace and human rights in Colombia is the surest path to security, regional stability, and economic prosperity. It is also the right thing to do.

Topics: Latin America
Next entry »Why U.S. is wary about intervening in Syria
« Previous entryMiddle East set for a great sorting?

Next entry »Why U.S. is wary about intervening in Syria
« Previous entryMiddle East set for a great sorting?