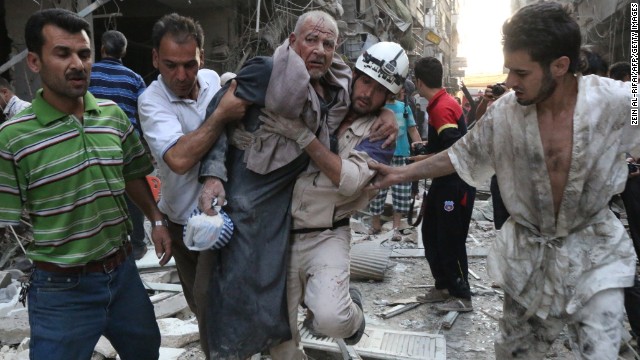 Why U.S. is wary about intervening in Syria

CNN speaks with Fareed about the latest developments in Iraq and U.S. involvement in the region. This is an edited version of the transcript.

So, aren't these boots on the ground in Iraq?

You know, they are boots on the ground. But I think in a way that's a kind of weird shorthand that we’ve developed to try to understand whether or not this is an open-ended mission. The really important question is, what is the nature of the mission? You go into a country and say we are going to save the country, restore it to its normal functioning, nation build – those are vast open-ended missions. It's not clear how you would do them. It's not clear how you would ever know you had succeeded.

Here, you have a very defined mission. The idea is to try to save these Yazidis, to perhaps bolster the Peshmerga, the Kurdish forces. That seems to me pretty doable. There is a great danger, and I understand it, a wariness about getting more involved in Iraq. But you don't slip down every slippery slope.

Once they come off the mountaintop, what do we do for the Yazidis?

Where they will go is probably the ones that want to leave will go into Kurdistan, the Kurdish part of Iraq, which is very tolerant, but also very secure, and will become increasingly secure because we are now supplying the Kurdish forces with arms.

Remember, because these guys are an autonomous part of Iraq, the United States wouldn't sell them weaponry, wouldn't give them weaponry, because the idea was that that's violating the central government. You know, we're meant to be giving money to the Iraqi army, not to this group of militias.  Well, we have gotten over that now. The United States is helping the Kurdish Peshmerga. The Yazidis will go there. That's a secure, safe, tolerant place and can be defended.

Why didn't we help in other places, as it's been pointed out, that the Obama doctrine seems to pick and choose. Is it just because this one was doable?

That's not a small concern. The fact that Syria is experiencing a humanitarian catastrophe is very real. What are you going to do about it? How are you going to go in? Is there a way you could actually lessen that? A lot of people say we should arm the people opposing the al-Assad regime in Syria.

But in the short-run – and there is very good academic literature on this – when you support one side in a civil war that is pretty intense, it only prolongs the conflict. Because what is going to happen is al-Assad is now winning, sort of. The United States and other forces start helping the other side, they're going to start killing more Alawites and al-Assad supporters.

The war goes on, and if it goes inconclusively, more people die. Again, that's why I think this one is both from a humanitarian point of view worth doing, but also doable, because there's a discreet, narrow mission, you're trying to save these people, there is a place they can go to. You can secure it.

None of those conditions are in Syria. So, yes, there is a practical reality, just as we all face. You want to help lots of people in the world. But you do ask yourself, is there a smart way? Is there a charity I can do something with, where they do good, it's effective, it actually makes a difference?

Those are reasonable concerns for the Obama administration.