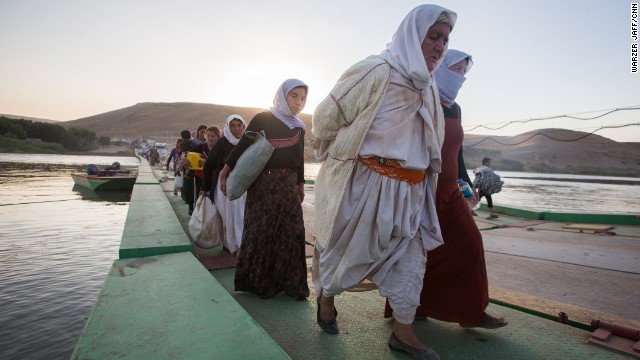 Why U.S. should support independence for Kurds

Editor's note: Conrad Burns was a U.S. senator for Montana from 1989 to 2007. The views expressed are his own.

In his first inaugural address, Ronald Reagan laid out his vision for re-establishing the United States as an "exemplar of freedom and a beacon of hope for those who do not now have freedom." This was hardly a new concept in 1981, yet as President Reagan assumed the presidency, the notion that the United States could, and should, serve as a guiding light to help guide peoples and nations in their quest for freedom was much in need of revival.

Today, as headlines are dominated by the growing threat posed by the extremists of Islamic State of Iraq and Syria to Iraq's Kurdish minority and the region, the United States faces a similar crisis of character.

America still serves as a guiding light against the stark backdrop of an increasingly troubled world, but I often wonder if the American people are fully aware of just how brightly this beacon shines or the effect it has on people from all walks of life, from every corner of the globe. It is time we as a nation concentrated our efforts on leading by example and renewing our commitment to helping those that continue to fight for freedom and the right to self-determination.

As a United States senator, I was extremely engaged in events in the Middle East, and I have remained involved since by working closely with companies and people in the region promoting American businesses and technologies in the hopes that increased economic activity would foster better relations and closer cultural ties.

Many of these efforts have centered on the Kurdistan region of Iraq. Over the last eight years, I have come to know and respect the people of Kurdistan and have witnessed first-hand their struggle for freedom and their desire to become a free and independent nation. I have also seen how the United States has served as an inspiration to the Kurdish people and how our own nation's history has inspired their leaders to seek autonomy from the Republic of Iraq and pursue prosperity by promoting freedom and liberty within their own borders.

Indeed, despite multiple wars, a despotic dictatorship and constant threats, Kurdistan has flourished in a part of the world rife with instability and misery. Today, Kurdistan boasts internal stability and security and reflects the American spirit of inclusion and tolerance. Kurdistan is one of the few places in the region where Muslims, Christians and Jews are living openly and comfortable side by side, without the fear of oppression or subjugation.

Meanwhile, Kurdistan is developing a strong and diversified economy based on agricultural, natural resources, tourism and industry – all of which are powered by hard work of Kurdish people and the emerging middle class.

The people of Kurdistan have been striving for independence and the right of self-government for generations. They have been close several times only to be struck down by outside world powers. They have endured atrocities and have paid the price for freedom. And it is therefore time that the United States took heed of these sacrifices and fulfilled its moral obligation to support the people of Kurdistan and their ambitions for freedom and national sovereignty.

Undoubtedly, there will be those that argue that the United States should not interfere with the internal politics of foreign nations. They will argue that our interest in the region is based solely on the vast reserves of natural resources that Kurdistan possesses. Such doubters fail to understand the true importance of supporting freedom and are ignoring the ambitions of the Kurdish people.

True, Kurdistan's location and natural resources make it a very attractive strategic partner of the United States and our allies, but such political and strategic considerations should not be at the forefront of our decision-making process.  Instead, we should support independence for Kurdistan because it is the right thing to do, and because America should – and must – remain the guiding light for those in pursuit freedom.

In his farewell address, President Reagan returned to the notion he set forth in his inaugural address by stating that America is "still a beacon, still a magnet for all who must have freedom, for all the pilgrims from all the lost places who are hurtling through the darkness, toward home."

For generations the people of Kurdistan have navigated through the darkness of oppression and sacrifice with bravery and determination, all while keeping an unwavering eye on freedom's beacon. Now it is time for America to stand tall, voice our support, and provide our full assistance as they seek to emerge from the darkness and find comfort and rest in their new home – the Independent Republic of Kurdistan.​​