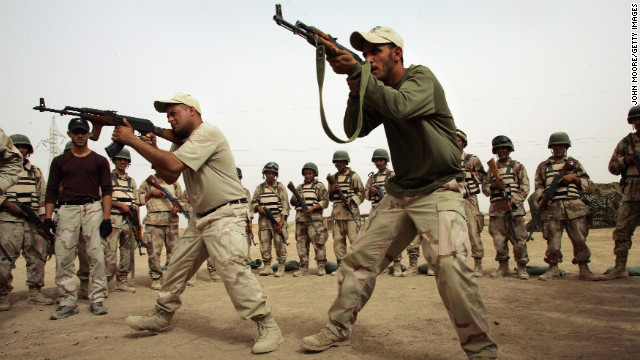 CNN speaks with Fareed Zakaria about reports over new advances by the Islamic State of Iraq and Syria. This is an edited version of the transcript.

There is reportedly one base remaining in Anbar Province under Iraqi control. Talking to a general, he said it isn't so significant. You disagree.

What you're seeing is that if you scratch the surface of the Iraqi army, it's a bunch of sectarian militias, and the Sunnis will not fight against ISIS because they don't like the Baghdad government.

They don't have that regard for a nation. It's like a sect nation.

They think at this point the Iraqi government is being run by Shia. And so they in a sense don't like ISIS, but they like the Shia government in Baghdad less. So what we have to come to grips with is, this army that doesn't really exist.

Billions of dollar poured into this army…

Billions of dollar poured into it, because it was based on the idea that there was an Iraq, that there was a nation that there would be a national army for. Maybe we need a different strategy, which is to stand up sectarian militias, Shia militias, Sunni militias. They already exist. And the Kurds have their Peshmerga, that model. Send them into fight in their areas, not in other areas where they would be regarded as a foreign army.

That's giving up on a lot, but if you look at events on the ground, that's what reality is telling us.

The reality with regard to Turkey – many are wondering what their role would be moving forward. We now know. We watched the parliamentary vote, that Turkey is now saying to the U.S. OK, you can use our country as this launch pad to bring your troops in and to fire rockets and whatnot. How significant is that move? Do you think that could be the next step toward maybe some ground troops from Turkey?

Turkey has put its head in the sand for so long, trying to believe they don't need to get involved, and they have allowed again their petty issues to overwhelm them.

Is this them pulling their head out of the sand just a little bit?

I think they're beginning to pull their head out of the sand. What they have been worried about…so the people in Kobani are Kurds. They don't want Kurdish forces to get stronger, which then might produce Kurdish separatism, which Turkey worries about because Turkey has lots of Kurds. They are trying to sort of limit the degree to which the Kurds, the ethnics Kurds in the area...

And they can't put all that aside and just fight the terrorists, bottom line?

And they can't put that aside because they don't feel that they're threatened. They feel that ISIS will stop at their border. And they're probably wrong. And so what you're seeing is everybody wants the United States to sweep in like a knight in shining armor.

Fix it for them so they can all free-ride on the United States. And I think one of the things we have to recognize is if the United States stays back and forces some of these governments in, they're going to get involved. They are threatened. This is their region.

We're 6,000 miles away. But, of course, they would much rather the United States come in and we have got all the firepower and Washington has all the firepower. Who wants to fight if the largest military in the history of the world is willing to do it for you?

Final question, Baghdad – how vulnerable? Do you worry about that?

I don't worry about it a lot, because the truth is that because Baghdad is now the Shia capital of Iraq, there are lots of Shia militias. The army is Shia, they will fight until the end. And, remember, the Iraqi army, even in its currently reduced state, it is several hundred thousand. ISIS may have 10,000 or 15,000 people. They are outnumbered 10 or 15 to one. The weapons that the Iraqi army has are much better. And these guys have the will to fight because they want to preserve Shia control of Baghdad.

Next entry »What I'm reading: How Germany managed to abolish university tuition fees
« Previous entryWhat role can the Peshmerga play in fighting ISIS?