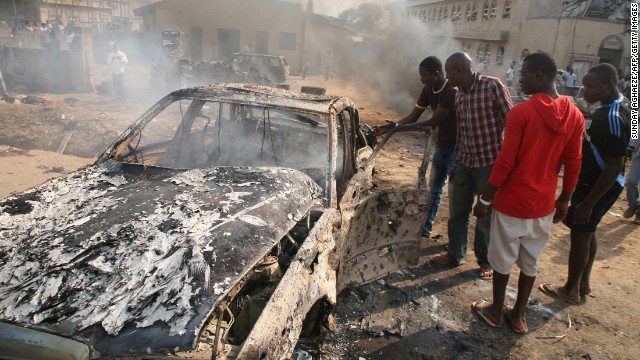 By David Cook, Special to CNN

Editor’s note: David Cook is an associate professor in the Department of Religion at Rice University and the author of Understanding Jihad. The views expressed are his own.

News that the Nigerian Salafi-jihadi group Boko Haram may have agreed on a truce with Nigeria’s government, after some four years of warfare, could be welcome news in one of West Africa’s most violent conflicts. But it remains to be seen whether this truce will actually materialize, whether it is merely an election ploy for Nigeria’s embattled president, Goodluck Jonathan, and most crucially whether it will bring about the release of numerous captives taken by Boko Haram during the past year.

Boko Haram has its roots in a quietist Salafi movement that was originally located in the bush of northern Nigeria that taught withdrawal from society and an extreme rejection of state-run (and Western-influenced) education – rejection not characteristic of other West African Salafi movements. After its charismatic leader Muhammad Yusuf was murdered by Nigerian security forces in July 2009, Boko Haram went underground, re-emerged under the leadership of Abubakar Shekau by 2010, and since has become the dominant force in three northeastern Nigerian states (Borno, Yobe and Adamawa).

While prior to 2014 Boko Haram was able to project force over a considerable section of northern and central Nigeria (including operations in the capital Abuja, at  the Armed Forces Command and Staff College, near Kaduna, and inside the important northern city of Kano), its tactics changed to mass slaughter at the beginning of the year. Estimates of the numbers killed during the past 10 months range up to 5,000, more than the total during all previous years combined. It is apparent that Boko Haram’s strategy has been to clear out large sections of northeastern Nigeria, attacking its usual targets: Christians, educated people at universities and colleges, government and military targets, and any foreigners in the region. Even more worrying has been the tendency towards kidnappings of women and girls.Nigerian government and armed forces have seemed both clueless and powerless in the face of the threat. Time and again during the past 10 months, when Boko Haram would enter villages or towns to attack civilians (often specifically Christians or students), the response of the army was either to flee, or if not in the region, to delay its counterattack. By May 2014, the Nigerian army in the northeast seemed close to collapse, and there were cases of mutiny by the soldiers, who frequently complained of being under-supported by the government.

In many cases reports of Nigerian army victories or successes against Boko Haram were revealed to have been either unsubstantiated, or achieved against local civilian targets instead of the insurgents (causing human rights concerns). It is apparent that Boko Haram has established hitherto invulnerable bases close to the border with Cameroon (the Sambisa Forest), and most likely has a core of at least 5,000 fighters, with a much larger range of supporters for intelligence-gathering and local intimidation. This latter support is evident in the kidnappings Boko Haram carries out for raising money, usually of Europeans and Chinese (aid workers, missionaries, priests, tourists) in Cameroon.

The group’s ability to target kidnappees, and to capture them without a hitch, is clear evidence that Boko Haram has a network in northern Cameroon, which is given further support by the kidnapping of the Cameroonian vice prime minister’s wife on July 27. Although it has not been stated directly, her recent release, with 10 Chinese workers, was likely through a ransom payment.

With this background, it is evident that the Nigerian government is under considerable pressure to produce results demonstrating that Boko Haram is under control. Boko Haram’s kidnapping of more than 200 girls from Chibok in April stands out as a failure of the Nigerian army and its inability to protect its most vulnerable citizens. Therefore, the suggestion on the part of the government that the expected truce might lead to the release of these captives should be seen in light of the upcoming presidential elections, scheduled for February 2015. One can expect that Jonathan will tout this as a success prior to his expected (but as yet unannounced) campaign for re-election.

Whether the truce with Boko Haram will actually accomplish anything is much more difficult to say. In tandem with the rise of the Islamic State in Iraq and Syria (ISIS), Boko Haram has declared the establishment of a caliphate, signaling its long-term ambitions. While Boko Haram has suffered some reverses during the recent past, there is no indication that the group has suffered any mortal damage. The most plausible interpretation of the truce is that it is a bought one (probably in tandem with the Cameroonian release of captives), and that Boko Haram is merely using it (assuming that it holds to the truce at all) as a respite in order to regroup.

Topics: Africa
Next entry »The problem with the U.S. strategy in Syria
« Previous entryAnalyst: There’s been a lot of hyperventilation about the ISIS threat to U.S.

Next entry »The problem with the U.S. strategy in Syria
« Previous entryAnalyst: There’s been a lot of hyperventilation about the ISIS threat to U.S.