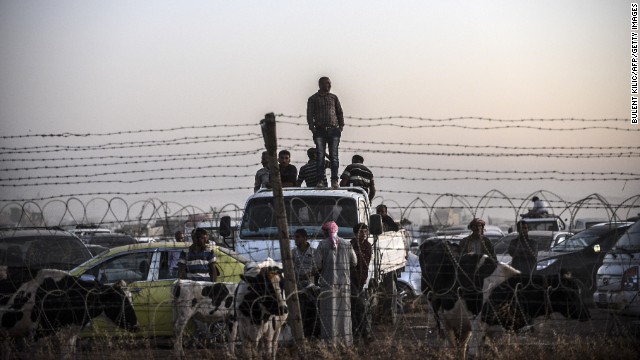 Aki Peritz is a former CIA counterterrorism analyst and coauthor of Find, Fix, Finish: Inside the Counterterrorism Campaigns that Killed bin Laden and Devastated Al Qaeda. You can follow him @akiperitz. Joshua W. Walker is a Transatlantic Fellow at the German Marshall Fund of the United States and a fellow at the Truman National Security Project. He previously served as a senior advisor to the U.S. Department of State. The views expressed are their own.

The beleaguered Kurds, fighting a desperate battle against the Islamic State of Iraq and Syria (ISIS) in Kobane, Syria, are finally receiving reinforcements. A small contingent of Iraqi Kurdish peshmerga are reportedly crossing Turkey to help defend their ethnic compatriots battle this existential threat.

But Turkey’s leaders are probably not thrilled with their reluctant decision to let Iraqi Kurds join the fight in Syria. Indeed, Turkish President Recep Tayyip Erdoğan earlier this month made his feelings about fighting ISIS crystal clear. “For us,” Ergodan reportedly said, “the [Kurdistan Workers’ Party, or PKK] is the same as ISIL (ISIS). It is wrong to consider them as different from each other."

While this might make sense from a Turkish-nationalist perspective – after all, Turkey has been fighting the PKK for over a generation – this suggests incredible short-sightedness on Ankara’s part. Turkey must place a far higher priority on fighting ISIS because the group, with its global ambitions, poses a far greater threat to the integrity of the Turkish state than a Kurdish Marxist organization ever will.

Indeed, for a group seeking to fulfill its religious destiny, ISIS’s covetous eyes aren’t on places like New York City, London, Beijing or Los Angeles. Rather, they are on places of real significance in the Islamic world, like Mecca, Jerusalem…and Istanbul. And lest Turks think they are not in ISIS’s future crosshairs, it’s important to remember that the founder of ISIS’s predecessor group, al Qaeda in Iraq, Abu Musab al-Zarqawi, had a keen interest in striking Turkey.

But even if Kobane does not ultimately fall to ISIS, Turkey still shares the longest border with the group, perhaps the first time any NATO ally is within sight of a terrorist organization without doing anything. ISIS is not expending so much effort to take Kobane merely to fight the Kurds; rather it is to consolidate its gains along the Turkish border to carve out a viable political entity.

Turkey likes to blame NATO and the U.S. in particular for the metastasizing conflict in Syria, and surely they deserve some of the blame. But Turkey is equally responsible for the way things have turned out on their border, given its exclusive focus on defeating Bashar al-Assad at any cost.

Erdogan claimed, “Foreign fighters have never entered Syria from our country. They may come to our country as tourists and cross into Syria, but no one can say that they cross in with their arms.” He’s technically right, of course; folks don’t arrive at Istanbul Ataturk Airport from Tunis or Brussels with duffelbags full of AK47s and RPGs. Instead, they get their arms and training south of the border.

We’ve seen how this movie can play out before. Following the U.S. invasion of Iraq in 2003, Damascus turned a blind eye to the fanatical foreigners who were transiting their territory to fight the Americans. It was such a concern that in 2007, Sen. Joe Lieberman seriously considered proposing legislation to sanction Damascus International Airport for its part in cycling foreign fighters into the Iraq conflict. But besides transiting through, these terror networks set down roots in Syria, so when that country began to unravel a few years ago, these links between smugglers, financiers, ideologues and military operatives could be reactivated for something closer to home.

ISIS’ “Jihadi Highway” clearly runs through Turkish soil. Why else would Ankara claim that they’ve already deported some 1,100 people trying to transit to Syria via Turkey? And beyond the thousand or so Turkish nationals now fighting in Syria, anecdotal evidence keeps piling up: two female Austrian teenagers arrived in Syria via Turkey. The 140+ Dutch fighters in Syria transited through Turkey. And the list goes on and on. And unfortunately for Ankara, highways run both ways.

To be sure, the Turks are doing much in the region – they are hosting over 1.6 million Syrian refugees. They are now allowing the United States to fly drones (but not manned aircraft) from Turkish bases. And since the PKK and ISIS are fighting each other on the Turkish border, some in Ankara might be tricked into agreeing with that shopworn Middle Eastern phrase, “the enemy of my enemy is my friend.” Or, at least not my enemy.

But Turkey’s recent bombing of the PKK sites within its borders combined with Ankara’s reported decision to skip the meeting where 22 other nations are coordinating an anti-ISIS military response with the U.S. are troubling on many levels. Thinking ISIS is a lesser threat than the PKK suggests a fundamental miscalculation on Erdogan’s part. The PKK’s leader sits in a Turkish prison working with Ankara towards an ultimate Kurdish-Turkish reconciliation from which both sides will benefit.

Furthermore, an ISIS nation that runs for hundreds of miles along Turkey’s border would become Erdogan’s lasting legacy, no matter how well the Turkish economy does in the future or how well his party performs at the polls. This festering sore will always be a regional problem. ISIS’s appeal to disenfranchised Sunnis across the Muslim world has already proved deadly in Iraq and Syria, and Ankara must take the lead to neutralize this imminent threat on its borders.

Turkey is belatedly coming around to fighting ISIS because the U.S. is putting great pressure on Ankara. Yet the U.S. government cannot confront ISIS on its own. Therefore, Turkey should become more confrontational with ISIS not because Washington wants it – but because it’s in Ankara’s ultimate best interest. With comments like Erdogan’s equating ISIS with the PKK, it’s obvious that this message is still not being communicated to the average Turkish citizen very well.

The terrorists are now literally at Turkey’s southern gates. And one day, in the not too distant future, they will look north, to those rich, attractive cities in Anatolia, and begin sharpening their knives for the conquest. And the Turks will have no one to blame but themselves if they don’t act now.

Topics: Turkey
Next entry »On GPS Sunday: Debating extremism in Islam, whether to fight ISIS, and Bourdain on Iran
« Previous entryWhy democracy took root in Tunisia and not Egypt

Next entry »On GPS Sunday: Debating extremism in Islam, whether to fight ISIS, and Bourdain on Iran
« Previous entryWhy democracy took root in Tunisia and not Egypt