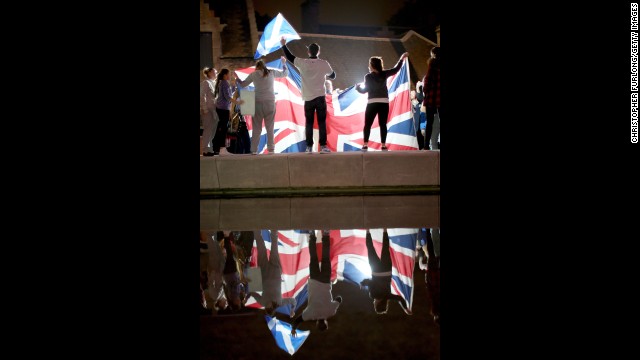 Jean Chrétien, prime minister of Canada at the time of its divisive referendum on separation with Québec, wrote that it took six months before wounds between Canada and Québec, even started to heal. And with 45 percent voting for independence, Scotland will be a divided country for some time to come.

For just as in the years of the Industrial Revolution people turned to political nationalism to protect and shelter their communities against the uneven and inequitable patterns of growth so, too, people seem to be turning back to – and mobilizing around – old loyalties and traditional identities as they seek to insulate themselves; whether it be in Catalonia or Belgium or Lombardy, they are demanding protection against what seems to be the economic disruption and social dislocation of globalization, which threatens to sweep aside long-established customs, values and ways of life.

But is September 18’s vote in Scotland not a moment of destiny? Not because nationalists have done so well, but because most Scots voted against an exit from the U.K.? Could the rejection of separation demonstrate that in this new global era nations can combine strong and vibrant identities with a willingness to engage in even deeper cooperation?

In short, could the referendum result become a turning point in favor of a connected world that is coming to recognize and act upon its interdependence? Could we not see Scotland as the first country to vote positively for, and to pioneer the idea of, an interdependent future? Could we not view Scotland as a beacon to the rest of the world for how nations living side by side with each other, can positively elect to cooperate and share?

The truth is that from the time of Scottish Enlightenment, when Adam Smith asked what it was not just to be a citizen of your local community but a citizen of the world, Scotland has always been far more internationalist, more outward-looking and more cosmopolitan than can be encapsulated in the ideas broadcast by narrow nationalisms.

Scots led the way in the Enlightenment, not only with Adam Smith’s idea in his Wealth of Nations of an open, free trade world that breaks free from mercantilism, but with his even more powerful idea in his Theory of Moral Sentiments of a world linked together by empathy; his idea that we were able to put ourselves in other peoples’ shoes – what was called ‘the circle of empathy’ – led people to feel beyond their immediate family circle, however distantly and faintly, feel the pain of others.

This underpinned the Scots’ achievement in partnering England and Wales in the world’s first industrial revolution. Scotland not only produced some of the world’s greatest inventors, starting with James Watt and his invention of the steam engine, but it also produced some of the world’s great reformers. For Scots led the way in civilizing the industrial economy by demanding and planning the creation of the British welfare state. And we did do so by abandoning our own distinctive Scottish social institutions, abolishing our 300-year-old Scottish Poor Law and calling for a United Kingdom NHS and welfare state, founded on equal treatment for every citizen – when sick, disabled, unemployed or elderly – across the UK. No other group of nations has managed to achieve what the joint efforts of the Scots, Welsh, Northern Irish and English managed: equal civil, political, social and economic rights for all, irrespective of nationality.

Scots who have argued for the benefit of sharing and cooperation are well placed to lead the way again as icons of the era of globalization. However, today the challenge is even more profound. In the last century we had to show how we could share the same rights when decisions were being made within a multinational state. Now we are part of a world where the global sourcing of goods has replaced their national sourcing, and where global flows have replaced national flows. In 2014 we have to show how we can share and cooperate when we are not just part of a multinational state but part of a more integrated, connected and interdependent global economy.

Can we show that neighbors of different cultures, traditions and identities can work with each other not just in a confined multinational state – but even in a more open and exposed global environment? Can we show that we don’t need to sever the connections between each other to thrive in the modern world, but can find ways of living together by not just sharing rights to services and benefits but by sharing sovereignty? In our case, we must do this through a strong Scottish Parliament as part of, not apart from, the rest of the U.K. and Europe.

In 1962, U.S. President John F. Kennedy called for the U.S. Declaration of Independence of the 1770s to be complemented by a Declaration of Interdependence of the 1960s. By answering those who claim that independence can make a difference with policies that show interdependence can make the difference, and is thus a bigger idea, we can show the way forward for Scotland is to do what we have always done best: to think big and not small.

Topics: Uncategorized
Next entry »Should West be worried by Russia naval moves?
« Previous entryWhat I'm reading: The nuclear gun is back on the table

Next entry »Should West be worried by Russia naval moves?
« Previous entryWhat I'm reading: The nuclear gun is back on the table