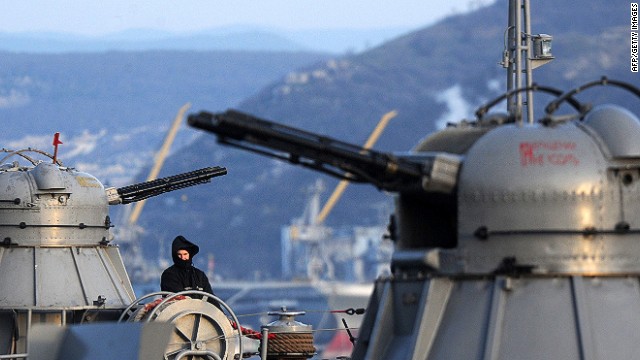 Should West be worried by Russia naval moves?

By James Kraska, Special to CNN

Editor's note: James Kraska is professor in the Stockton Center for the Study of International Law, U.S. Naval War College. The views expressed are his own.

Just as Russian ground forces have moved into Ukraine, in recent weeks Russian air and naval forces have conducted a handful of high-visibility deployments throughout the oceans and airspace of the global commons. Should the West be worried?

Generally, these operations comply with the international “rules of the road” at sea and in the air, and are in compliance with international law. All nations are entitled to freedom of navigation and overflight in the global commons. Thus, the deployments should be seen as great power theater, rather than as a violation of international law. Yet they also dispel any doubt that we now live in a tri-polar world, with a revanchist Russia and China bent on upending the U.S.-led global order in Europe and Asia, respectively.

Russia, for its part, is using its naval power to underscore the nation’s relevance and global reach. Indeed, this month Russia pledged to expand its forays into the Caribbean Sea and the Gulf of Mexico. The announcement follows an incident in June, when two Russian strategic bombers, bristling with intelligence-gathering electronics, came within 50 miles of the coast of California.

Since the eruption of war in Syria, Russia has added at least four warships, a spy ship, and a repair ship to its forward operating base in Tartus, Syria, as part of its new standing Mediterranean Task Force. Even more interesting, the Russian cruiser Varyag led a four-ship flotilla to waters off northeast Australia during last week’s G20 summit in Brisbane. After HMAS Parramatta led three Royal Australian Navy warships and maritime patrol aircraft to monitor them, Russia explained that the flotilla was testing their range capability, “in case they have to do climate change research in the Antarctic,” and that the ships could, if necessary, protect Russian President Vladimir Putin, who attended the summit.

These deployments complement Russian naval and air operations in the Arctic Ocean and Pacific Ocean. After a 15-year hiatus, in 2007 Russia resumed its long-range surveillance and strategic bomber flights in the Arctic region. These flights annoy Canada and worry the Nordic states, but seem to do more to cement ties between NATO and Finland and Sweden than anything. This October, the Swedish Navy spent a week patrolling the inner archipelago near Stockholm after sonar tracks of the seabed confirmed a “plausible foreign underwater operation.”

Rear Admiral Anders Grenstad stated that while the mysterious craft could not have been a submarine, the incident resurrected comparisons to an incident in 1981 when a Soviet submarine ran aground and surfaced just two kilometers from the main Swedish naval base at Karlskrona.

Russian strategic reconnaissance bomber flights reportedly fly near Japan more than 100 times a year, sometimes overflying the entire length of the island chain from Okinawa to Hokkaido. These patrols unnerve the Japan Self-Defense Force, which sends aircraft to intercept them.

In each of these cases, Russian naval and air forces serve as the tip of the spear for Kremlin diplomacy. Common threads run throughout each deployment. First, Russia is reaping past investments in naval force structure. Last year, the country reportedly added 36 ships to its inventory, allowing the Russian navy to replicate its worldwide operations of the Cold War. In Russia’s view, the deployments are a return to normalcy.

Second, the deployments are designed to convey to the world that Russia is a nation of global consequence, with the ability to project power in any region. With the Russian Federation headed for demographic ruin in the coming decades and the nation’s one-trick economy wholly dependent on the sagging oil and gas market, Russia desperately seeks to revive the trappings of its former glory. Third, in contrast to Russia’s invasion of Ukraine, which undermines the core proscription against armed intervention in the United Nations Charter, Russia’s naval and air deployments are entirely consistent with international law, and in particular the United Nations Convention on the Law of the Sea (UNCLOS).

The navigational rules set forth in UNCLOS reflect customary international law and are binding on all nations. Ships and aircraft of all nations, including warships, submarines, and military aircraft, are entitled to exercise high seas freedoms beyond any coastal State’s 12 nautical mile territorial sea. The only limitation on these operations is that they must be “peaceful” under the U.N. Charter in that they cannot unlawfully use or threaten the use of force. Within 12 miles, ships – but not aircraft – may transit in innocent passage, a much more restrictive rule than the UN Charter.

The uptick in Russian air and sea operations is a reminder that the principle of freedom of navigation in the global commons entitles all states the unimpeded use of the oceans and international airspace.

Topics: Military • Russia
Next entry »Is Russia cozying up to China?
« Previous entryInterdependence, not independence, key to success

Next entry »Is Russia cozying up to China?
« Previous entryInterdependence, not independence, key to success