How to defuse Sudan conflict

Editor's Note: Christopher Alessi is an associate staff writer at the Council on Foreign Relations. Jendayi Frazer is an Adjunct Senior Fellow for Africa Studies at CFR.  The following interview is reprinted from CFR.org with permission .

Tensions along the oil-rich border that divides Sudan and recently independent South Sudan have escalated in recent weeks, raising the prospect of a full-scale war between the longtime foes. China, which maintains considerable oil interests in both countries, has called for restraint (Reuters) and vowed to work with the United States to bring both sides back to the negotiating table.Jendayi Frazer, the former U.S. assistant secretary of state for African affairs, says while the role of mediation should remain with the African Union, the United States and China are vital players in this conflict that can bring pressure to bear on both parties.

Editor's Note: Christopher Alessi is an associate staff writer at CFR.org. This is an Analysis Brief, reprinted with the permission of the Council on Foreign Relations. The views expressed in this article are solely those of Christopher Alessi.

Greece and the euro: To leave or not to leave?

Editor's Note: Christopher Alessi is an associate staff writer at CFR.org. This is an Analysis Brief, reprinted with the permission of the Council on Foreign Relations. The views expressed in this article are solely those of Christopher Alessi.

For the first time in the two-year eurozone sovereign debt crisis, European Union leaders have openly acknowledged that Greece could exit the single-currency union, potentially plunging the global economy back into recession.

The shift followed a short-lived scheme (WSJ) by Greek Prime Minister George Papandreou to put a referendum to the Greek public over a new debt rescue plan agreed on by EU leaders last week. Papandreou abandoned the idea after his finance minister and other Socialist allies quickly turned against him on November 3. Meeting at the G20 leaders' summit in Cannes, German Chancellor Angela Merkel and French President Nicolas Sarkozy made clear that the preservation of the eurozone was a more urgent priority than rescuing Greece (Guardian).  END_OF_DOCUMENT_TOKEN_TO_BE_REPLACED

Twenty-seven EU heads of state meeting over the weekend once again failed to reach a concrete agreement for tackling a eurozone sovereign debt crisis that is threatening global economic stability. European leaders vowed to deliver a comprehensive solution to the two-year old crisis after they meet for another round of negotiations on October 26.

Sunday's meeting did indicate that EU officials arebeginning to make progress (AFP) on three core issues: recapitalizing the continent's banks, leveraging the temporary European Financial Stability Facility (EFSF), and providing Greece with a second financial rescue package. The sovereign debt crisis has begun to infect Italy, the eurozone's third largest economy. And as the contagion spreads from Greece to the core of the single currency union, it has endangered many French banks that hold large quantities of Italian and Greek government bonds. This has put other exposed continental banks–and U.S. financial institutions– at risk, feeding investor unease throughout global markets. END_OF_DOCUMENT_TOKEN_TO_BE_REPLACED 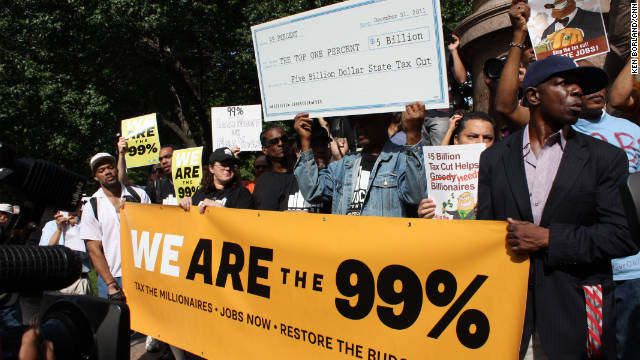 Although the Occupy Wall Street movement began in America, its reach is expanding globally.
October 19th, 2011
01:00 AM ET

The Occupy Wall Street protests that began in New York City a month ago gained worldwide momentum (CBS/AP) over the weekend, as hundreds of thousands of demonstrators in nine hundred cities protested corporate greed and wealth inequality. Protesters from London to Sydney echoed the anti-capitalist, populist rhetoric of the Occupy movement in what was deemed a "global day of protest" (TIME).

The unrest comes amid a mounting European sovereign debt crisis, which has contributed to ongoing market volatility and fears of another global economic recession. Governments around the world–particularly in the indebted eurozone periphery–have implemented harsh austerity programs, making economic growth all but impossible. In the United States, anger at Wall Street bankers seen as responsible for the global financial crisis–and at the government, for bailing out the banks with taxpayer money–is exacerbated by a persistently dismal job market. END_OF_DOCUMENT_TOKEN_TO_BE_REPLACED

The U.S. Senate passed legislation on Tuesday that would tax the goods of countries with "misaligned" currencies (WSJ). The bipartisan measure is meant to target China, a trading partner the United States has routinely criticized for devaluing its currency. China warned that such a move could instigate a trade war (BBC) between the two nations, threatening the global economy.

U.S. officials have argued that by artificially holding down the yuan, China is keeping its exports inexpensive for U.S. consumers, thus undermining the U.S. manufacturing sector. The measure has gained traction because of the perception that China's alleged unfair trade advantage (NYT) is costing U.S. jobs and contributing to an already-bleak employment outlook. END_OF_DOCUMENT_TOKEN_TO_BE_REPLACED

Editor's Note: Christopher Alessi is an associate staff writer at the Council on Foreign Relations. The following is reprinted from CFR.org's Analysis Brief .

Even if lawmakers in Washington are able to reach agreement to avoid default (Politico) ahead of the August 2 deadline,  it may not be enough to stop leading credit rating agencies from downgrading the United States from its AAA rating.

The three leading agencies – Standard and Poor's, Moody's, and Fitch – have indicated that if the United States does not implement a "credible" (Bloomberg) and comprehensive deficit-reduction package that would see savings of around $4 trillion over the next ten years, a downgrade  of U.S. Treasury debt could be imminent. Economists, analysts, and investors have warned that such a move would raise U.S. borrowing costs and slow overall growth,  with global economic impact.