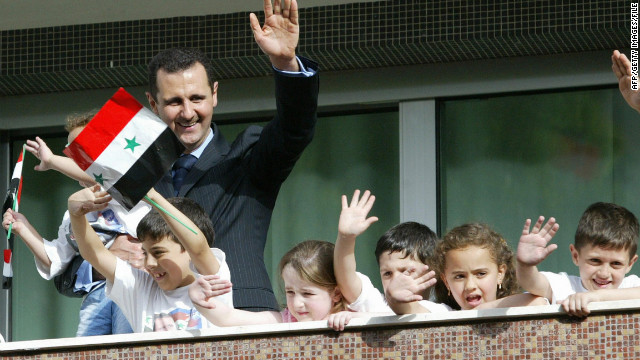 Analysts say that for Bashar al-Assad, the key to winning the media war is not credibility, but a strong, consistent message.
August 20th, 2012
02:55 PM ET

Is al-Assad winning the propaganda war in Syria?

Editor’s note: The following text is from Global Post, which provides views — important, moving or just odd — from around the world. The views expressed are solely those of the author.

One image of the Syrian conflict that has resonated widely in the West is that of corpses, including those of children, who have fallen victim to government attacks.

But a far more heroic image of Syrian President Bashar al-Assad's security forces is being fostered by the regime’s own media, part of a determined effort to keep up morale as fighting continues to rage in Aleppo and other cities.

Nightly on state television, pictures are shown of children kissing soldiers or being hoisted aloft by them, with a patriotic song, “This is the Nation’s Army,” playing in the background.

On August 1, Armed Forces Day, a picture of a small boy in a scouts uniform, saluting and handing a red rose to a wounded soldier on his hospital bed, led state media coverage. It was complemented by reports from across Syria of citizens paying blustery tributes to the army for, in their words, shielding the nation from the sweeping international conspiracy against it.

END_OF_DOCUMENT_TOKEN_TO_BE_REPLACED 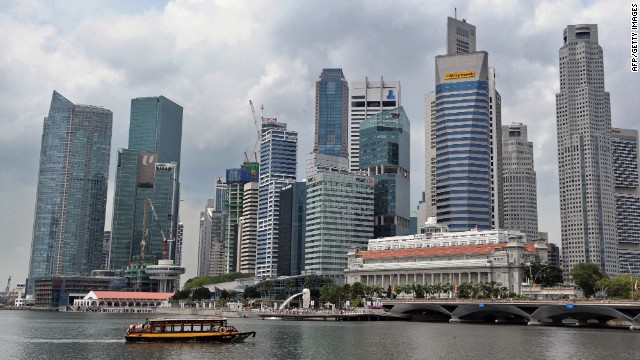 If you enjoy peering inside the minds of the world’s super rich, take a look through the 2012 “Wealth Report.”

Compiled by Citibank, and a property consultancy called Knight Frank, it’s a lengthy analysis based partly on interviews with the super rich. (Definition: people with more than $25 million in investable assets.)

Yes, the report contains musings on why yacht sales are down and the pros and cons of buying a sports franchise. But that’s not the most interesting part.

END_OF_DOCUMENT_TOKEN_TO_BE_REPLACED

Whether you call them jiu ling hou – the “post-’90s generation” – or millennials, things are not so different for recent college graduates in China and the United States.

Derided in both countries as spoiled, selfish and entitled, yet struggling to find decent work, they belong to generations whose high expectations for comfort and prosperity have been thwarted by economic trends.

In America, the class of 2012 faces crippling student debt, declining wages, and 9.9 percent unemployment rate for college graduates under 25 years old – all against the backdrop of a lingering national downturn.

END_OF_DOCUMENT_TOKEN_TO_BE_REPLACED

Is Europe's border drone plan a potential asset or a waste?

It’s summer in the Mediterranean. Sun seeking holidaymakers lounge on sandy beaches, glittering yachts glide into and out of quaint old harbors and packed cruise ships hop between idyllic islands.

But it’s no holiday further out at sea, where migrants float crammed together in rickety boats or cling to sinking rafts, some choking on their final breaths as they and their dreams of finding a better life in Europe perish under the sparkling water.

END_OF_DOCUMENT_TOKEN_TO_BE_REPLACED 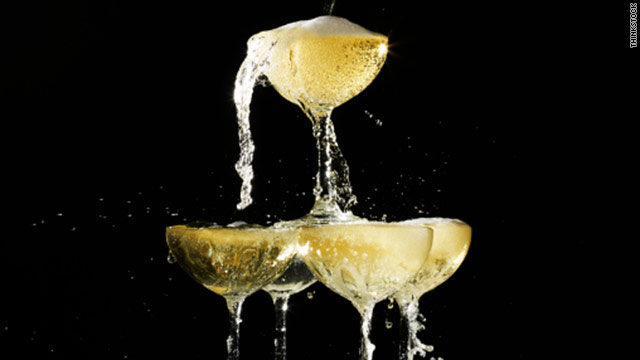 Climate change may not be so great for polar bears, but money and bubbly are flowing for champagne makers.
September 16th, 2011
12:20 PM ET

Climate change may be one of the greatest perils of our time, contributing to droughts, floods, deadly heat waves and super-charged hurricanes.

But for the moment, France’s Champagne makers are raising their glasses to it.

They say the climatic shift has made their lives easier and their Champagne better, allowing producers to harvest earlier than before.

END_OF_DOCUMENT_TOKEN_TO_BE_REPLACED

Editor's Note: The following text is from GlobalPost, which provides excellent coverage of world news – important, moving and just odd.

A new hedge fund that uses Twitter to determine its trading strategy outperformed the Standard & Poor's 500 Index and the average hedge fund in its first month of trading.

London-based Derwent Capital, which bills itself as "Europe's first social media-based Hedge Fund," returned 1.85% in July, according to Financial News. The S&P 500 fell 2.2% during that time, while the average hedge fund made 0.76%. END_OF_DOCUMENT_TOKEN_TO_BE_REPLACED

Chinese media have lambasted the United States for bringing the global economy to the edge of chaos by failing to top up the Treasury's borrowing limit and avoid a catastrophic default.

State-run Xinhua news agency said other countries would suffer because of the wrangling between Democrats and Republicans over a deficit reduction plan with just days to go before the Treasury runs out of funds.

"The ugliest part of the saga is that the well-being of many other countries is also in the impact zone when the donkey and the elephant fight," the commentary published on Xinhua said, according to the Financial Times.

It said the United States was addicted to debt and advised Washington to "revisit the time-tested common sense that one should live within one’s means." END_OF_DOCUMENT_TOKEN_TO_BE_REPLACED

Local poppy farmers harvest the opium sap from the bulb of the plant during a ten-day harvesting period May 31, 2011 in Fayzabad, Badakhshan, Afghanistan. (Getty Images)
July 25th, 2011
02:00 PM ET

KOSTROMA, Russia — Yuri Frolov, 24, started using heroin when he was 16 and living in the city of Kostroma, north of Moscow.

Kostroma isn’t known for heroin. The city of almost 300,000 is on Russia’s Golden Ring, a collection of picturesque cities northeast of Moscow visited by tourists for their typical Russian architecture and onion-shaped church domes.

My wife and I met Frolov in May at a drug rehabilitation center in the countryside in southern Russia, near the city of Stavropol. The center is austere. There is no running water and residents have to use outhouses. It’s part work camp, part monastery. The ascetic lifestyle and fresh air are thought to help addicts give up their dependencies. But this bucolic patch of land in the rolling hills of the northern Caucasus comes as a shock for many of the young addicts, who are used to cell phones and urban apartment blocks.

Before he came to the center, Frolov had never worked with livestock. Here he is in charge of collecting water from a nearby reservoir via horse-drawn carriage. In his free time he works with the center’s horses in a sprawling field.

Frolov had been clean for five months when we met. He is broad-shouldered and tall. But there is something delicate about his long face and green eyes.

Sitting on a concrete slab near the stables, Frolov spoke of how easy it was for him to purchase heroin back in Kostroma:

“There was a Gypsy village only three miles from the town I’m from. You’d go there. There’d be cops standing outside. You’d pay them 100 rubles ($3.60) to get in and 50 rubles to get out. The gypsies would yell at you, ‘Buy from me. I’ve got the best stuff.’ You didn’t need to look or anything. There was good quality heroin everywhere.” END_OF_DOCUMENT_TOKEN_TO_BE_REPLACED

Terrorists connected to al Qaeda in the Arabian Peninsula said they were creating the animated film to inspire children to join the jihad, but some users on jihadi websites said the characters were too "scary" for kids

An al Qaeda affiliate in Yemen is planning to release an animated film cartoon aimed at recruiting young people to the militant network.

END_OF_DOCUMENT_TOKEN_TO_BE_REPLACED

With less fat on them, and less buoyancy, the young bears often can't survive the increased distances to get to stable ice or land. (Getty Images)
July 21st, 2011
12:28 PM ET

As the Arctic sea ice habitat retreats, polar bears have to swim longer distances to find stable ice or to reach land, and their cubs are suffering, according to a new study presented Tuesday at the International Bear Association Conference in Ottawa, Canada.

Polar bears, not naturally aquatic animals, hunt, eat and give birth on ice or on land, according to Reuters. Earlier studies have shown that the bears are swimming hundreds of miles to reach solid ice or land, but a new study demonstrates that the longer swims increase cub mortality, compared with cubs that didn't swim such long distances. According to Reuters:

“Climate change is pulling the sea ice out from under polar bears’ feet, forcing some to swim longer distances to find food and habitat,” said Geoff York of World Wildlife Fund, a co-author of the study. END_OF_DOCUMENT_TOKEN_TO_BE_REPLACED

Celebrities with a penchant for weird baby names (looking at you, David and Victoria Beckham) should avoid having kids in New Zealand.

The country’s Registrar of Births, Deaths and Marriages has been cracking down on parents who get too creative when naming their kids, Australia’s Herald Sun reports.

The list of weird names for kids that are banned by New Zealand’s names registrar has grown to include Lucifer, Duke, Messiah and 89. END_OF_DOCUMENT_TOKEN_TO_BE_REPLACED

China has its controversial one-child policy. But in India, health officials in the state of Rajasthan are taking a very different steer on population control, offering a swag of prizes – TVs, food processors and even a free car – to compatriots who step up to be sterilised.

The innovative scheme follows recent predictions that India, home to 1.21 billion people, will soon pip China as the world’s most populated country.

In Rajasthan – India’s largest state by area, also known as "Land of the Kings" – authorities are banking on the lottery to remedy flagging sterilization targets.

On Friday, Pratap Singh Dutter, deputy chief medical officer of Jhunjhunu district told AFP: "Everyone who gets sterilized between today and 30 September will be entered into a lottery to win prizes. We felt we were falling behind on our sterilization targets of 21,000 per year, so the district collector came up with this idea. We hope at least 6,000 people will come forward in the next 3 months."  END_OF_DOCUMENT_TOKEN_TO_BE_REPLACED