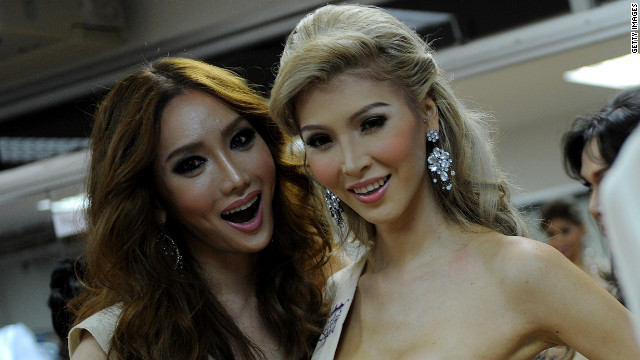 How much should sex matter?

Editor's Note: Peter Singer is professor of bioethics at Princeton University and Laureate Professor at the University of Melbourne. Agata Sagan is an independent researcher living in Warsaw. For more , visit Project Syndicate's new website, or check it out on Facebook and Twitter.

Jenna Talackova reached the finals of Miss Universe Canada last month, before being disqualified because she was not a “natural born” female. The tall, beautiful blonde told the media that she had considered herself a female since she was four years old, had begun hormone treatment at 14, and had sex reassignment surgery at 19. Her disqualification raises the question of what it really means to be a “Miss.”

A question of broader significance was raised by the case of an eight-year-old Los Angeles child who is anatomically female, but dresses as, and wants to be considered, a boy. His mother tried unsuccessfully to enroll him in a private school as a boy. Is it really essential that every human being be labeled “male” or “female” in accordance with his or her biological sex? END_OF_DOCUMENT_TOKEN_TO_BE_REPLACED

We are getting fatter. In Australia, the United States, and many other countries, it has become commonplace to see people so fat that they waddle rather than walk. The rise in obesity is steepest in the developed world, but it is occurring in middle-income and poor countries as well.

Is a person’s weight his or her own business? Should we simply become more accepting of diverse body shapes? I don’t think so. Obesity is an ethical issue, because an increase in weight by some imposes costs on others.

I am writing this at an airport. A slight Asian woman has checked in with, I would guess, about 40 kilograms (88 pounds) of suitcases and boxes. She pays extra for exceeding the weight allowance. A man who must weigh at least 40 kilos more than she does, but whose baggage is under the limit, pays nothing. Yet, in terms of the airplane’s fuel consumption, it is all the same whether the extra weight is baggage or body fat. END_OF_DOCUMENT_TOKEN_TO_BE_REPLACED

Forty years ago, I stood with a few other students in a busy Oxford street handing out leaflets protesting the use of battery cages to hold hens. Most of those who took the leaflets did not know that their eggs came from hens kept in cages so small that even one bird – the cages normally housed four – would be unable to fully stretch and flap her wings. The hens could never walk around freely, or lay eggs in a nest.

Many people applauded our youthful idealism, but told us that we had no hope of ever changing a major industry. They were wrong. END_OF_DOCUMENT_TOKEN_TO_BE_REPLACED

Singer: Should we ban cigarettes?

U.S. President Barack Obama’s doctor confirmed last month that the president no longer smokes. At the urging of his wife, Michelle Obama, the president first resolved to stop smoking in 2006, and has used nicotine replacement therapy to help him. If it took Obama, a man strong-willed enough to aspire to and achieve the U.S. presidency, five years to kick the habit, it is not surprising that hundreds of millions of smokers find themselves unable to quit.

Although smoking has fallen sharply in the U.S., from about 40% of the population in 1970 to only 20% today, the proportion of smokers stopped dropping around 2004. There are still 46 million American adult smokers, and smoking kills about 443,000 Americans each year. Worldwide, the number of cigarettes sold – six trillion a year, enough to reach the sun and back – is at an all-time high. Six million people die each year from smoking – more than from AIDS, malaria, and traffic accidents combined. Of the 1.3 billion Chinese, more than one in ten will die from smoking. END_OF_DOCUMENT_TOKEN_TO_BE_REPLACED

For the death penalty yet pro-life? Really?

Three significant events relating to the death penalty occurred in the United States during September. The one that gained the most publicity was the execution in Georgia of Troy Davis, who had been convicted of the 1989 murder of Mark McPhail, an off-duty police officer.

Davis’s death sentence was carried out despite serious doubts about whether he was guilty of the crime for which he received it. Witnesses who had testified at his trial later said that prosecutors had coerced them. Even death-penalty supporters protested against his execution, saying that he should be given a new trial. But the courts denied his appeals. In his final words, he proclaimed his innocence.

The deliberate judicial killing of a man who might have been innocent is deeply disturbing. But the execution was consistent with something that happened just two weeks earlier, at one of the debates between Republican candidates for their party’s nomination to challenge President Barack Obama next year. Texas Governor Rick Perry was reminded that during his term of office, the death penalty has been carried out 234 times. No other governor in modern times has presided over as many executions. But what is more remarkable is that some audience members applauded when the high number of executions was mentioned. END_OF_DOCUMENT_TOKEN_TO_BE_REPLACED

When prevention is better than relief

Editor’s Note: Peter Singer is Professor of Bioethics at Princeton University and author of Practical Ethics, One World, and The Life You Can Save. You can read more from him at Project Syndicate.

When the earthquake and tsunami hit Japan in March, Brian Tucker was in Padang, Indonesia. Tucker was working with a colleague to design a refuge that could save thousands of lives if – or rather, when – a tsunami like the one in 1797 that came out of the Indian Ocean, some 600 miles southeast of where the 2004 Asian tsunami originated, strikes again.

Tucker is the founder and president of GeoHazards International, a nonprofit organization whose mission is to reduce death and suffering due to earthquakes in the world’s most vulnerable communities. END_OF_DOCUMENT_TOKEN_TO_BE_REPLACED