The austerity debate was the topic du jour at this year’s World Economic Forum in Davos. With good reason. Europe is slipping back into recession just when recovery in the United States is finally getting some traction.  That has undermined the case for fiscal consolidation, which is so heavily favored in Europe.

Yet I took away a different conclusion from Davos. I moderated a session on “The New Context in East Asia,” addressed by a panel of senior representatives from Thailand, South Korea, Malaysia, Singapore, and Japan. With the exception of the Japanese participant, all had first-hand experience with the devastating Asian financial crisis of the late 1990’s. END_OF_DOCUMENT_TOKEN_TO_BE_REPLACED

Long the most fragmented nation on earth, China is being brought together like never before by a new connectivity. Its Internet community is expanding at hyper speed, with profound implications for the Chinese economy, to say nothing of the country’s social norms and political system. This genie cannot be stuffed back in the bottle. Once connected, there is no turning back.

The pace of transformation is breathtaking. According to Internet World Stats, the number of Internet users in China has more than tripled since 2006, soaring to 485 million in mid-2011 – more than three times that in 2006. Moreover, China’s rush to connectivity is far from over. As of mid-2011, only 36% of its 1.3 billion people were connected – far short of the nearly 80% penetration rates seen in South Korea, Japan, and the United States. END_OF_DOCUMENT_TOKEN_TO_BE_REPLACED

For the second time in three years, global economic recovery is at risk. In 2008, it was all about the subprime crisis made in America. Today, it is the sovereign-debt crisis made in Europe. The alarm bells should be ringing loud and clear across Asia – an export-led region that cannot afford to ignore repeated shocks to its two largest sources of external demand.

Indeed, both of these shocks will have long-lasting repercussions. In the United States, the American consumer (who still accounts for 71% of US GDP) remains in the wrenching throes of a Japanese-like balance-sheet recession. In the 15 quarters since the beginning of 2008, real consumer spending has increased at an anemic 0.4% average annual rate.

Never before has America, the world’s biggest consumer, been so weak for so long. Until US households make greater progress in reducing excessive debt loads and rebuilding personal savings – a process that could take many more years if it continues at its recent snail-like pace – a balance-sheet-constrained US economy will remain hobbled by exceedingly slow growth. END_OF_DOCUMENT_TOKEN_TO_BE_REPLACED

The United States has a classic multilateral trade imbalance. While it runs a large trade deficit with China, it also runs deficits with 87 other countries. A multilateral deficit cannot be fixed by putting pressure on one of its bilateral components. But try telling that to America’s growing chorus of China bashers.

America’s massive trade deficit is a direct consequence of an unprecedented shortfall of domestic saving. The broadest and most meaningful measure of a country’s saving capacity is what economists call the “net national saving rate” – the combined saving of individuals, businesses, and the government. It is measured in “net” terms to strip out the depreciation associated with aging or obsolescent capacity. It provides a measure of the saving that is available to fund expansion of a country’s capital stock, and thus to sustain its economic growth. END_OF_DOCUMENT_TOKEN_TO_BE_REPLACED 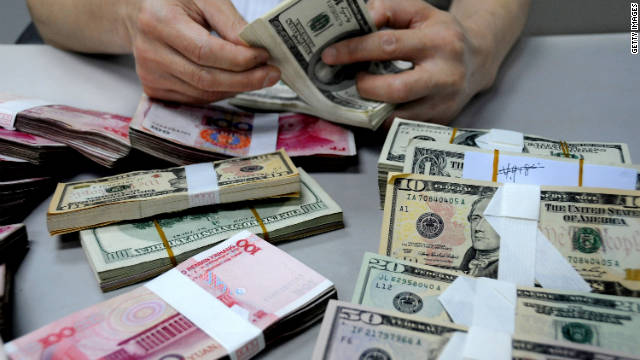 A staff member counts money at a branch of the Bank of China in Lianyungang, Jiangsu Province. (Getty Images)
October 5th, 2011
10:30 AM ET

Editor's Note: Stephen S. Roach is a member of the faculty at Yale University, is Non-Executive Chairman of Morgan Stanley Asia and the author of The Next Asia.  For more, visit Project Syndicate or follow it on Facebook and Twitter.

China’s economy is slowing. This is no surprise for an export-led economy dependent on faltering global demand. But China’s looming slowdown is likely to be both manageable and welcome. Fears of a hard landing are overblown.

To be sure, the economic data have softened. Purchasing managers’ indices are now threatening the “50” threshold, which has long been associated with the break-even point between expansion and contraction. Similar downtrends are evident in a broad array of leading indicators, ranging from consumer expectations, money supply, and the stock market, to steel production, industrial product sales, and newly started construction.

But this is not 2008. Back then, global commerce was collapsing, presaging a 10.7% drop in the volume of world trade in 2009 – the sharpest annual contraction since the 1930s. In response, China’s export performance swung from 26% annual growth in July 2008 to a 27% contraction by February 2009. Sequential GDP growth slowed to a low single-digit pace – a virtual standstill by Chinese standards. And more than 20 million migrant workers reportedly lost their jobs in export-led Guangdong province. By late 2008, China was in the throes of the functional equivalent of a full-blown recession. END_OF_DOCUMENT_TOKEN_TO_BE_REPLACED

One number explains our economic woes

Editor's Note: Stephen S. Roach, a member of the faculty at Yale University, is Non-Executive Chairman of Morgan Stanley Asia and the author of The Next Asia. For more from Stephen S. Roach, visit Project Syndicate or follow it on Facebook and Twitter.

The number is 0.2%. It is the average annualized growth of U.S. consumer spending over the past 14 quarters – calculated in inflation-adjusted terms from the first quarter of 2008 to the second quarter of 2011. Never before in the post-World War II era have American consumers been so weak for so long. This one number encapsulates much of what is wrong today in the U.S. – and in the global economy.

There are two distinct phases to this period of unprecedented U.S. consumer weakness. From the first quarter of 2008 through the second period of 2009, consumer demand fell for six consecutive quarters at a 2.2% annual rate. Not surprisingly, the contraction was most acute during the depths of the Great Crisis, when consumption plunged at a 4.5% rate in the third and fourth quarters of 2008.